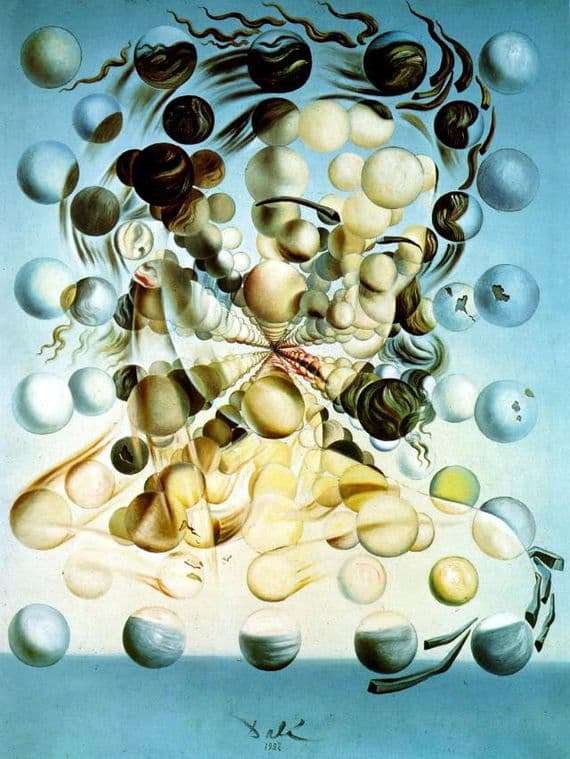 All Dali paintings are distinguished by their unusual appeal. I want to carefully consider every corner, so as not to miss more than one detail. So in his famous and great Galatea spheres. Looking at her, one wonders: how did the artist so skillfully manage to portray a face through a collection of spheres? Perfection and harmony of their merging can only be surprised. Such a masterpiece is possible only for a true master.

Salvador Dali wrote his picture back in 1952 during the period of nuclear mystical creativity. At that time, the artist studied a variety of sciences and came across the theory of atoms. This theory impressed Dali so much that he began to write a new picture. He depicts the face of his wife from a multitude of small-spheres of atoms, merging into a single whole corridor. The symmetry of these circles forms a powerful perspective and gives the picture a three-dimensional look.

The lips of Galatea are the shadow of a series of balls. Eyes like two separate small planets. The outline of the nose, oval of the face, ears, hair, as if breaks these spheres into separate atoms. Color combinations and contrasts make them seem voluminous, convex and embossed. As if Galatea is a transparent shell consisting of color contrasts of many small ideal spheres.

Galatea, like a small universe consisting of atoms, surrounded by atoms, disintegrating into hundreds of small pieces. The work was performed mainly in blue and blue tons – shades of space, sky, weightlessness.

Only its individual elements reflecting Gala’s face, her hair, lips, and body are painted in natural colors. The whole composition enchants and enchants the viewer. It creates the impression of movement of the circles. It’s as if Galatea is spinning with the help of every single living atom.