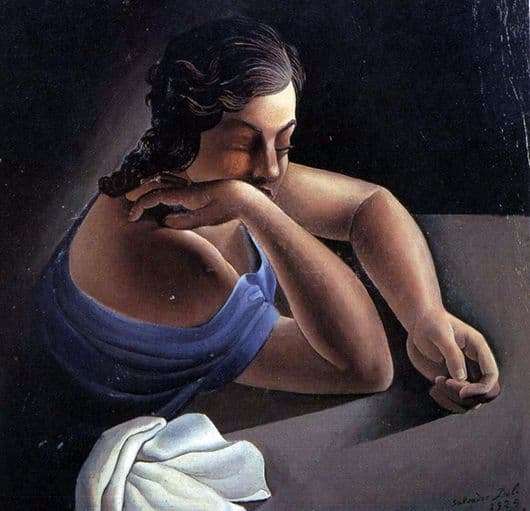 On a black background depicts a woman with a sleepy face.

She is wearing a blue open dress. The strap is lowered slightly on the shoulder. One arm is bent at the elbow in the way that patients do after they donate blood from a vein. The second hand is open, the fingers are folded in such a way, as if in the hands there is some kind of thin object like a pencil or syringe.

Apparently – in front of us is a portrait of a morphine. Worn eyelids, body posture gives us this analogy, moreover, next to the lady, on a gray table there is either a towel, or a tablecloth, folded so that it was possible to pull the veins with this device for a successful injection.

Salvador Dali is an extraordinary figure and even sinister in places, therefore it is not difficult to assume that human vices could attract his attention as a material for artistic self-realization. Moreover, at that time, namely in 1929, the era of decadence reigned in the world, where morphine and cocaine were quite an ordinary attribute of the intelligentsia.

Let’s return to the girl, behind her back we see a bright shadow, as the forerunner of death. Light beats her face, as if from behind the frame. The long, oily dark brown hair of a woman is combed back, her clear eyebrows gracefully bend in a narcotic trance.

Also, looking closer, we may find that El Salvador did not bother to draw eyelashes on one girl’s eye. Thus, there is a feeling that the eyeball of the lady sitting at the table seems to be sealed, sealed or sealed. And this is also quite symbolic, given the general disharmony of the picture.

The overall style of the picture is somewhat convex, the variety of colors is rather scanty, and the emotional response caused by this work makes us think over why the artist painted it?