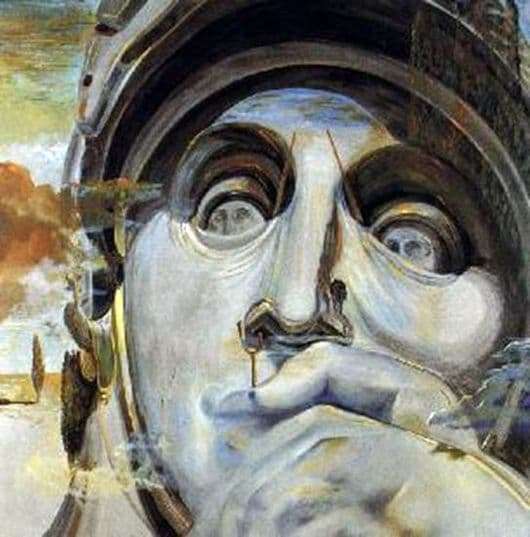 Looking into these eyes, you unwittingly catch yourself thinking that they are deprived of at least some glimpse of reason. Perhaps we have a soldier in our midst who is distraught by the endless succession of murders, deaths and horror he saw in the carnage called war. It is possible that this is a fanatical commander who blindly professes only one strategy – a strategy of victory, and no matter how much human sacrifice it will turn out.

These feelings cover when you look at the picture of Salvador Dali “Warrior”, dating back to 1982. Where and what did the hero of the canvas look at, who is reflected in his eyes? Enemy, friend, and maybe he himself? Perhaps the warrior looked into his soul and, shaken by what he saw, was unable to rest any longer. It seems that the character of the picture just stepped over that fine line, separating madness and common sense, because, despite the fact that the viewer sees someone in the warrior’s pupils, they still resemble the deep dark wells of human consciousness, where cruelty, thirst for greatness and hatred are hidden.

And suddenly, it’s the loopholes of an impregnable fortress, from where ruthless hands are watching, ready at any moment to hit the enemy with a bow or crossbow, or pour boiling tar on the opponent’s head? But what if we see the stern face of the god of war itself show through the rare clouds against the sky background? He has many names – Ares, Mars, but the essence is always the same. It requires a tribute expressed in the number of lives put on the altar of battles and battles. This picture is a reminder of how close people are to