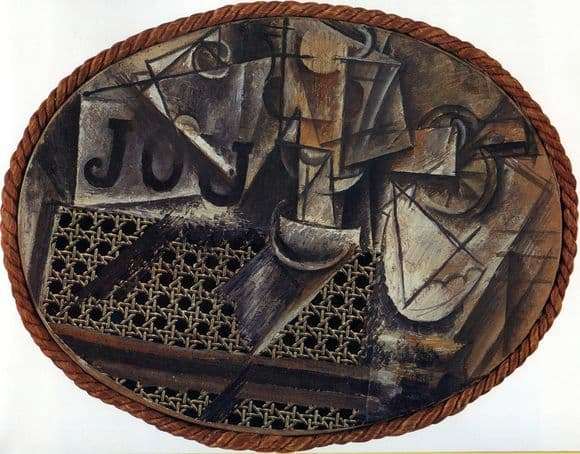 Pablo Picasso’s Synthetic Cubism begins in 1912. In the same year, Picasso wrote and “Still Life with a wicker chair.” The artist’s creative work during this period is characterized by the creation of collages from various materials, elements and textures. They subsequently merge into a single composition. Picasso adds in them fonts, letters that help the public to comprehend the image.

“Still life with a wicker chair” has an oval shape. It is full of irrelevant elements: on the right side there is a similarity of a glass and half a lemon, and on the left you can see the stem of the tube. As it should be in synthetic cubism, the letters JOU (from the word Journal) are present in this still-life. The letter J is wholly owned by paper: it is, like the letter O, in a flat position. But the letter U is noticeably different from them. It breaks down and is subject to its own movement.

Just below is a patterned linoleum, which by its texture is similar to a wicker chair. Thanks to the shadows and stripes that cover a piece of linoleum, the viewer ceases to perceive it in the same flat position as the letters. Still life is framed by an oval frame, which is made of rope.

Creating this still life, Picasso deliberately wants to deceive the viewer. He invites the public to admire the aesthetics of the image, and not to give in to thinking about the objects of still life. But from what he saw on the image, the questions themselves begin to appear in the heads of the audience. In the composition, each object is balanced and corresponds to the overall color.