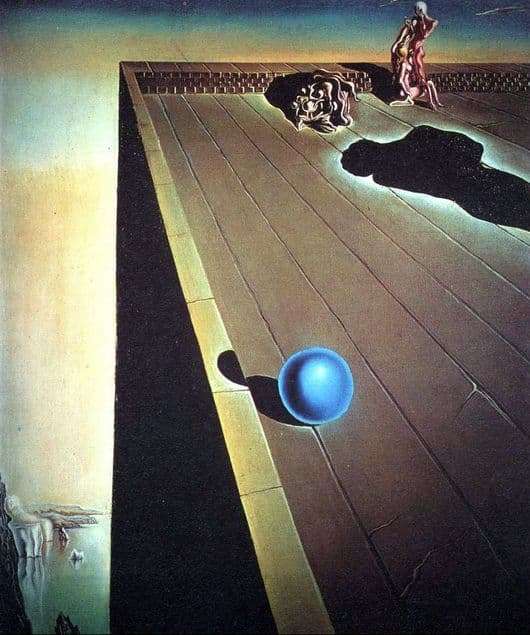 The great surrealist of the 20th century, Salvador Dali, left many questions behind him, most of which are expressed in his paintings. His works cannot be evaluated or understood unequivocally, everyone sees something of their own, comes to a special understanding of the artist’s surrealistic perception of the world around him. Before the eyes of the viewer appears the roof of a high tower. The sun illuminates the roof where the two lovers meet.

They are in unambiguous positions. The comfort and enjoyment of the couple is disturbed by someone else whose body casts a huge shadow on the roof of the tower. The observer is looking at them with interest. Nearby on the roof is depicted the head of a lion, which in the symbolism of Dali is the embodiment of insane passion, boundless and all-consuming. The blue ball is a symbol of sincerity, light feeling, love, happiness. He is in the foreground attracting the viewer in the first place, switching his attention to a pair of lovers, as if asking to be left alone. But the secret observer personifies social condemnation, the censure of the couple in love, depriving them of the opportunity to experience pleasure, to do what they want, calling for meeting the expectations of society.

The observer forces them to follow the rules adopted in this society. But meanwhile, the observer himself tests the stud in front of lovers, but has the duty to blame them. A man is ashamed of his position, seeks to hide, to hide from the viewer’s eye. A woman does not feel shame, do not rush to hide or run away. The tower – the rise of laws, rules, principles, a huge burden created by society for many centuries. The tower has several cracks – a symbol of the destruction of a multi-year system. Around the tower is empty space.