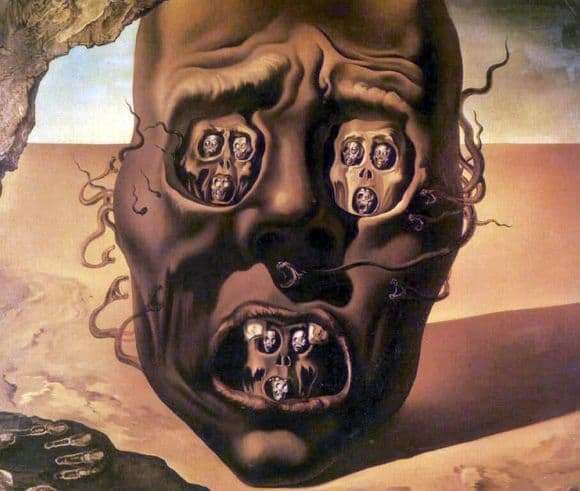 Salvador Dali could not see how the nazi troops burst into his native France. He left for the USA with his wife, having left his favorite places, realizing with pain and bitterness that everything would be destroyed and broken.

The horror of war, fear, bloodshed overwhelmed the artist. Everything that was cute and expensive for many years in one moment was trampled, burned and torn to pieces. It seemed that all dreams, all plans were buried alive under a Nazi boot.

In the US, Dali was waiting for success, recognition, his life there was very happy and rich, but then, when the artist sailed on a boat, leaving France, he did not yet know. Every nerve of his was strained, like a string, emotions demanded a way out and, right there, on the ship Dali began his painting “The Face of War” (1940).

This time he retreated from his usual manner, the picture was written very simply and intelligibly. She screamed, she burst into consciousness, she shackled the horror of all who contemplated her.

Against the background of a scorched, lifeless desert, one human head is depicted, which is gripped with a grimace of horror and endless suffering. A skinned, hairless skull is a bright symbol of war.

The orbits and a twisted mouth repeat this nightmare many times. Skulls, skulls, skulls, and still inhuman horror – that’s all that war brings to all who stand in its way. Next to the war there is no life, and in itself it is nightmarish and dead.

Numerous snakes are born from the head and eat it. They are more like nasty worms, but their mouths have been opened and it seems that even now their angry hiss is heard.

The contemplator of the picture is not a bystander, he is supposed to be here, only looking at the horrible face from the cave. This feeling reinforces the trace by hand in the corner of the picture.

They give me the impression that I want to call for reason – now, when you are under cover, in a cave, think whether it is worth going to a place where only the lifeless mask of death is worth, whether it is worth starting wars that devour their own starters, who bring endless suffering and are doomed to terrible death.