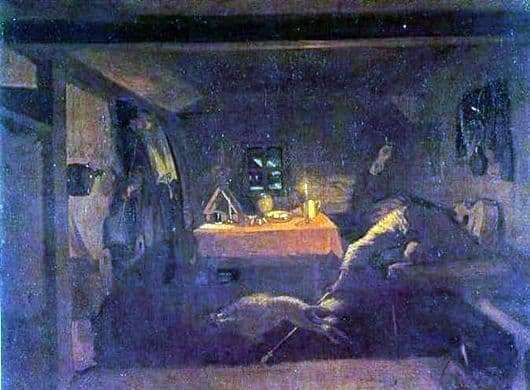 In 1851-1852, the famous Russian artist Fedotov painted the last picture he completed to the end, entitled “Anchor, Another, Anchor”. The picture is not quite clear and seemed vague, the same as the soldier’s life depicted on it. A dark room, illuminated by the light of a candle and the moon, which penetrates through a small window, a bed, a towel and a soldiers’ bowler on the wall, that’s its interior miserable.

Outside, cold wind and snow, there is winter, the room is warm and good, but perhaps as cold as in the yard in the heart of a man who lies on the bed. Most likely, this is a soldier stationed in a winter apartment in a peasant hut. He is an officer, because he lives alone in the room, and also because of the fact that he has a dog, the game with which is depicted in the picture. Far from his comrades, from the hustle and bustle of social life, the soldier is bored, he has nothing to do, he does not read books, he does not want to sleep, and frost outside the window interferes with fresh air walks. For many months, this room has become the meaning of his life, has evolved throughout his life, and now he just does not know what else to do.

The dog is a poodle, happy to jump over the stick, and the person lying on the bed repeats the same movement over and over again, forcing the dog to play again and again. And it is clear that the dog, like a man, is tired, but this is the only thing left for them to at least somehow have fun in the winter evening. Therefore, a person invariably repeats the words: “Anchor, more, Anchor”, which literally means “more, more, more” in French, this forces the dog to action, but nothing changes, because they play for the whole evenings

The picture requires a long comprehension, and therefore it is difficult for visual perception, but after it is better considered, everything becomes clear and understandable, therefore you should not immediately move away from the picture, you need to stop, think and understand.