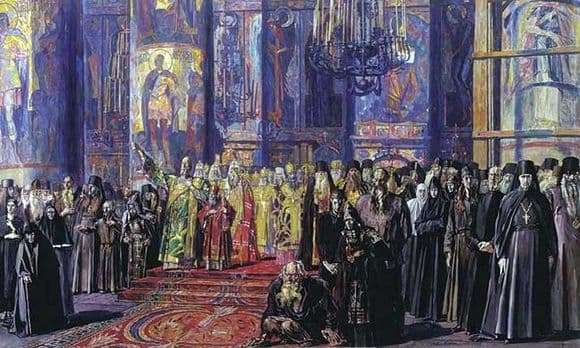 The history of the main work of the Soviet Russian painter Pavel Korin is majestic and tragic. The grandeur of the painting “Russia leaving” in the scope of the artistic plan, and the tragedy that he was not destined to be fully realized – Corin’s work remained unfinished.

The Tretyakov Gallery stores 29 fragments for a large-scale composition of an unwritten picture. Visitors to the museum, however, see independent holistic images in the sketches, and mentally putting together the depicted scenes, they understand the conceived master.

The action of the canvas “Russia leaving” returns the audience in 1925 to the Moscow Donskoy Monastery. The clergy of all ranks, sincerely believers and fanatics, holy fools and beggars – all say goodbye to Patriarch Tikhon in the sacred ceremony of the funeral. Pavel Korin had a chance to witness this solemn dramatic procession together with other artists, composers and masters of the pen. The soul of the Russian painter from everything he saw stirred up with a sad tear.

The inconspicuous voice of the Orthodox churches responded in everyday life only with a silent beating; now – at the moment of farewell to the main spiritual mentor, he sounded full force, he grieved, but he hoped for the victory of Orthodox Russia.

The philosophical picture conveys in the smallest details the robes of bishops, nuns, clergy of all degrees, their characters and mental agony at the time of pilgrimage. The master of the interior of the church – ancient frescoes with the faces of saints – wrote with exceptional expressiveness.

Korin originally called the future masterpiece a mourning prayer service – “Requiem”. The painting “Rus'” was the picture according to the advice of Maxim Gorky, who admired the artist’s idea and protected her from the godless Soviet power.

Over the years, the “Requiem” has been transformed from the concept of the destruction of Russian spirituality to the testimony of wealth and fortitude of the Church.