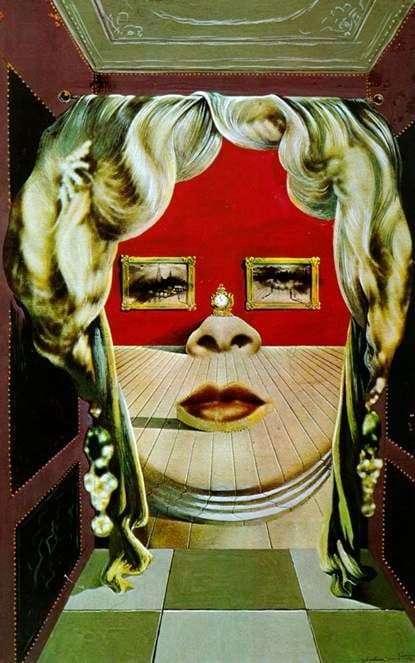 Salvador Dali – the famous follower of surrealism – provoked with his creative work endless reviews of admiration and harsh criticism. However, undoubtedly, this eccentric man always made people wonder, and each time he revealed to the public new facets of art, balancing on the verge of shock and ambiguity.

“Face May West” – one of the “comic” works of the artist, written in 1935. The face of the famous American actress made in the form of a surrealistic room. By the way, the version of the picture was transferred to reality. Forty years later, the master re-created the image of the “paper” room in his theater-museum in the city of Figueres, Oscar Tusquets. The exposition of the room-illusion opened in 1974.

An interesting fact is that the sofa of candy-pink color, with the help of which the artist depicted the lips of the actress, subsequently had a separate history and became a cult in the world of interior.

Hue lips after writing a picture gained fame, inspired fashion designer Elsa Schiaparely, who actively used this color in their clothes. The idea of interpreting the face of a woman in the form of a room and interior details vividly showed how popularity and fame Mae West had an immense impact on various sectors of society, especially on cinema and theater.

It is safe to say that the manner of execution of the artistic canvas accurately conveys the universal and undisputed love and worship of this strong and independent woman.