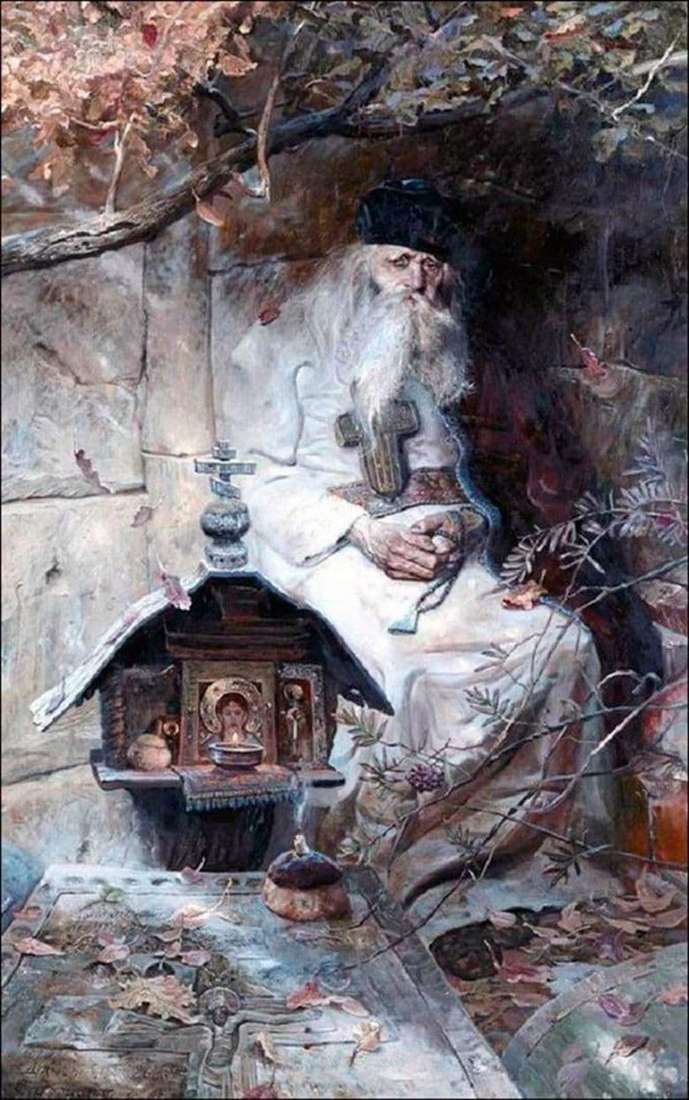 How little we, ordinary people, know about those who have devoted their whole lives to serving God. This picture seems to open the door to the world of clergy.

The central image of the picture is an old man. He went out into the street early in the autumn morning and decided to sit down and rest, leaning on a large stone wall. We do not know what this man thinks about, what desires he has, whether there are dreams. Not only by his gray hair, but also by his eyes one can see that he lived a long life full of difficulties and sadness. His eyes completely wilted. White grown beard loosely lies on the chest of the old man.

The painting was painted by a contemporary artist in 2001. But judging by the clothes of the man depicted on the canvas, the artist takes us back several centuries. If you look closely, then only one detail indicates that this old man lived for a long time before our days – shoes are worn on his feet

instead of the usual modern shoes for a man.

The clergyman wears traditional light-colored clothing. It seems as if the clothes and beard are completely merged, form one whole. Even the pale face strick does not stand out against this background. Yellowed foliage even more suggests thinking about the withering of life. The tree sheds its foliage as fast as the years of the elder flow. The old man is warming this cold autumn day only with a warm caftan draped over one shoulder.

Perhaps soon the old man will not. Has he managed to do in this life everything he dreamed of? It is unlikely that thoughts of a man are busy with such earthly, low questions. He clearly thinks of the highest, of meeting with God, or of human sins, which sometimes overpower each of us. He prays for all of us.

Before the old man is a small altar with an icon. Next to it is a stone object that looks more like a coffin. On the stone surface is carved the figure of the crucified Jesus Christ.