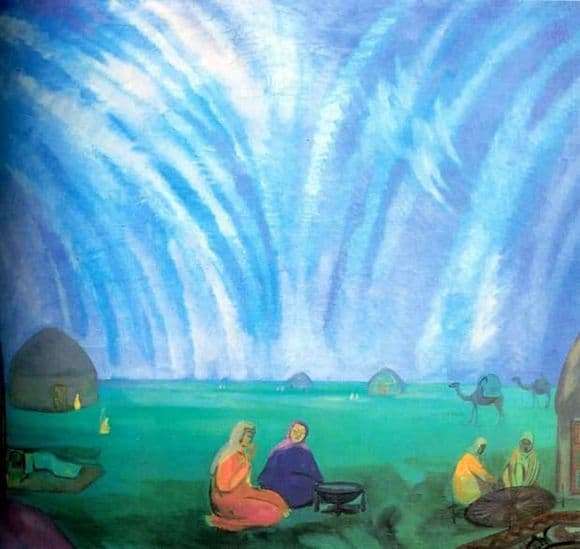 Kuznetsov’s canvas, Mirage in the Steppe, is included in the list of works that were written at the very top of the heyday of the artist’s artistic talent. The picture as if personifies the revival and return of the artist, after his creative crisis, which occurred to him at the dawn of the 1900s.

The picture shows the wanderings of the master in the eternal and sometimes useless search for something “eternal, great”, and for this he again turns to the East. Moreover, his travels in Tashkent, trips to Samarkand, Trans-Volga steppes played a huge role in this eternal search.

Kuznetsov master is characterized by a certain contemplation different from the rest, which is what appeared on the canvas. The picture received a very virgin and extremely poetic color. An idle and kind of lyrical sound, even deeper than it actually is.

It becomes clear to the viewer that the whole entourage, objects, human figures, as if accidentally seen by the master, were specially made a little blurry and vague, as if they were seen not only by the artist, but also subsequently by the viewer.

The people depicted on the canvas, in the steppe like a mirage, and their images are fleeting, against the background of something eternal, that is why such ghostly images are created that simplifies their color reflection and perception, to some weightless figures, but they just are the center of the picture, allowing to understand the main idea.

You can note that the curves and tilts of the figures are repeated in the lines of the yurts, which is in the background. Smears are quite wide, even the vibration is felt when they are applied, and they convey the spirit of space. The wizard shows the steppe, open space, which turns into a stream of color gamut.

This technique creates a special matte style, filling the picture with glow.