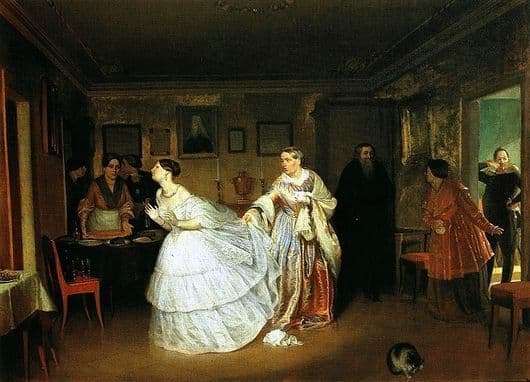 The painting “Major Matchmaking” is the most famous painting by Russian artist Pavel Andreevich Fedotov. Its plot is closely related to the real stories of the time.

Often impoverished nobles sought to marry the daughters of merchants, which allowed them to receive a rich dowry. Thus, they exchanged their nobility for gold, while merchants received good connections and generosity for their grandchildren. Naturally, it was not about any love, it was not on one or the other.

We see a similar picture from the life of Fedotov. The groom officer is standing by, twisting his taut mustache and thinking of the rich kusha he can get after the wedding. Against the central background, a frightened and cutesy bride, dressed in a rich pink and white dress (who is perhaps the only positive character in this picture), is trying to escape from her mother, who authoritatively holds her daughter.

Nearby is the girl’s father, hastily buttoning the coat of his coat and also thinking out his own benefits from the upcoming wedding. The matchmaker is facing the father of the family and trying to hide the excitement of the bride. Nearby the servant, with irony watching what is happening, prepares the room for the meeting of an important guest. And only the kitten in the foreground of the picture is busy with his important business, he is washing his face with a contented look and does not think about the upcoming engagement.

Thus, the canvas tells us about a simple “sale” of a girl who was brought up, dressed up, and gave her education only so that later it would be beneficial for her to marry. We understand that with such an approach, a person turns into a thing. Recall the words of the famous besdannitsy N. A. Larisa Ostrovsky: “I am a thing, a beautiful toy.” A thing that you can, if you wish, sell and profit from its sale.

Contemporaries greeted the picture with approval, the leading newspapers of St. Petersburg wrote about it, pointing to such wedding deals as a shameful stain on the morals of their time.