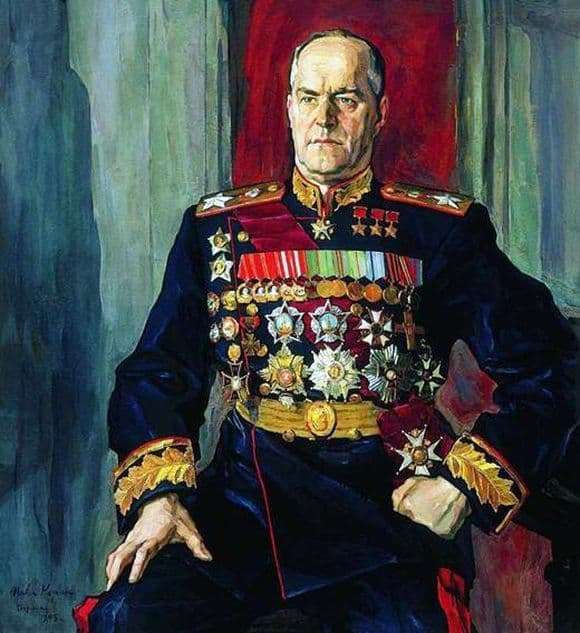 Over the portrait of Marshal Zhukov, the artist Korin began working immediately after the end of World War II, namely in one of the autumn months of 1945. He finished his work surprisingly quickly – by December of the same year.

The speed of the work and its quality are explained very simply – Marshal demanded that Korin deal with this order and this slave as quickly as possible. Therefore, in order to perform it not only quickly, but also qualitatively, the artist had to go to the territory of Berlin. The fact is that Zhukov, being a very busy man in the post-war period, was also unable to stay long in Moscow.

And in order to travel freely and go to this city outside the USSR, the artist received the honorary and opening many roads with the rank of captain. Between frequent, but short sessions of creating a portrait, the artist walked around the ruined city. And he even went to places where civilians could not be.

These walks helped him feel the spirit and atmosphere of the postwar period. This was necessary in order to show Marshal Zhukov as accurately and truthfully as he became for the whole country, the people and the government in general.

He could draw a portrait of Marshal not in his front dress, but in ordinary clothes, but he was given a special order to depict Marshal as smart. After the work was completed, Marshal wrote to the board of arts about how he liked the work. He also noted separately that he really liked the “field” expression that the artist expressed in the portrait. To the artist’s question about what a “field” person is, Zhukov replied that it was the face of a man who had just returned from the battlefield. Therefore, Zhukov was pleased with the work done.