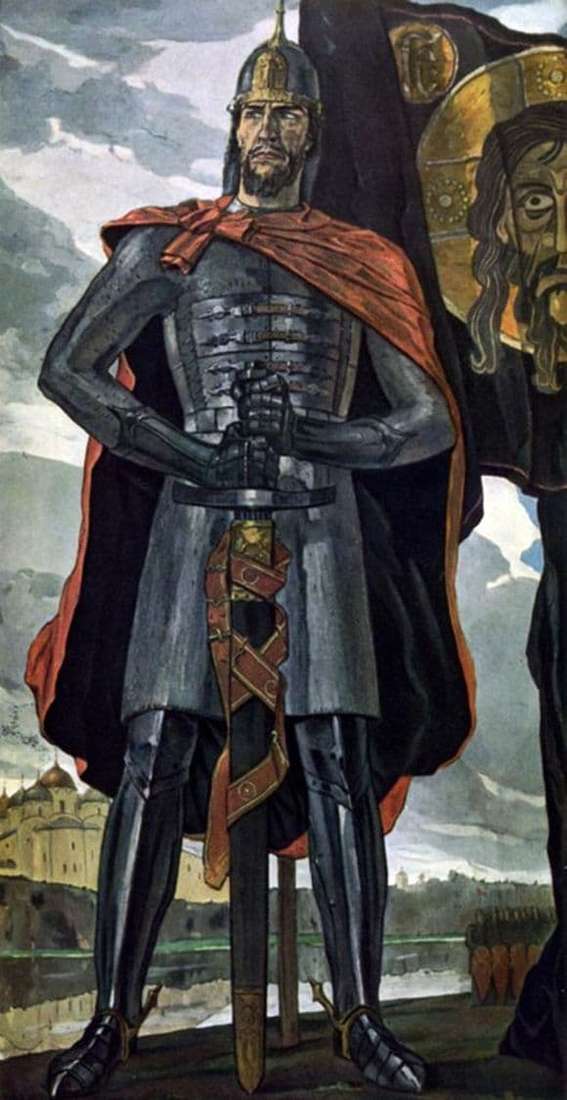 Triptych was commissioned by the artist in the year of the Great Patriotic War, when the theme of confrontation to the invader was central to art. The soldiers going to the front were inspired by them. The rear men who provided the soldiers with food, weapons and clothing also found solace in it.

“Alexander Nevsky” was written under reports from the front, under the roar of anti-aircraft guns, under the bright light of searchlights sky-cutting. He was called to bring inspiration and inspiration in the souls of the audience, the confidence that the enemy can be defeated, no matter how terrible it may seem, and no matter how unthinkable its hordes may be.

In the left and right parts of the triptych, soldiers are going to war. They are escorted by women – an old mother, leaning on a cane, a wife holding a small child in her arms. It is worth fighting for them, for the sake of life to continue, the child grew up, the mother was able to live out her life in peace and quiet, and not in an all-consuming fear for her son. The land itself, its river, village, small church also needs protection, and is also going to wait for its sons.

In the middle, the image of a warrior naturally develops. Alexander Nevsky – a man who stopped the German knights, like no one else could inspire the defenders of the country to war with the fascist invaders. In his figure there is something monumental, the memory of the ancient heroes, and at the same time – iconic rigor, a banner with the face of Christ, reminiscent of the holiness of the Russian land. He stands, leaning on his sword, behind his back is drinking the coats and the cloak swaying in the wind, and, fully dressed in armor, he is waiting for those with whom he will have to fight to come. They will come and die from the sword with which they came.

And behind him – defenseless, dear, beloved land. The white-walled city on the river, the cloudy, frowning sky, ready, it seems, to cry. For them you need to fight for children and mothers who remained in the city. And it is impossible not to win – as in his time Alexander could not fail to win.