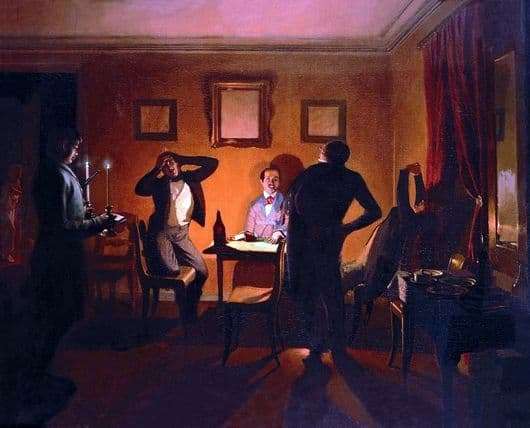 The painting of Pavel Fedotov is very peculiar. So, in the film “The Players”, the author tries to portray what is happening, with the glance of the hero who lost, and his partners became terrible phantoms for him.

The players spent the whole evening in mutual deception, vying, defeating and suffering defeat. All behaved passionately and prudently, but were together. They were united by a table of green cloth and the light of a burning candle. And all this time, there was hope for change for the better. The night passed, and those who won were on one side of the light Rubicon, and the one who lost was on the other. In the picture they are separated not only by the light, but also by the space of the room, and the movement.

The loser is lit by two candles that stand on the table, so the figure seems to be some kind of double halo of dark color. The winning artist depicted not illuminated shadows.

He does not move, but they somehow twist. He lost, but he does not panic and does not cry, but squeezes a glass of wine with one hand, and turns the other one upside down with his other hand. Despite the loss, he seems ridiculous: there is an unlit smoking cigar in his teeth, and there is a kind of caricature grimace on his face that looks like a smile. The loser is like a madman, he is in a trance, behaving aloofly and silently, like a lonely spectator, who from the stalls looks at the actors, the player looks at his teammates in the game, but does not see them.

Winners shy away from the bright light. They scatter in all directions. These are just faceless monstrous phantoms that are punished for the victory with anguish that is incomprehensible to us. It seems that the artist depicted all three of them differently, but they are all terrible, lifeless, unnatural.

And these three empty souls meander on the background of a bare wall, where three empty frames and three reflectors of evil spirits hang – mirrors.

So masterfully Fedotov in the “Players” showed how people who spent time at the card table turned into empty shells.