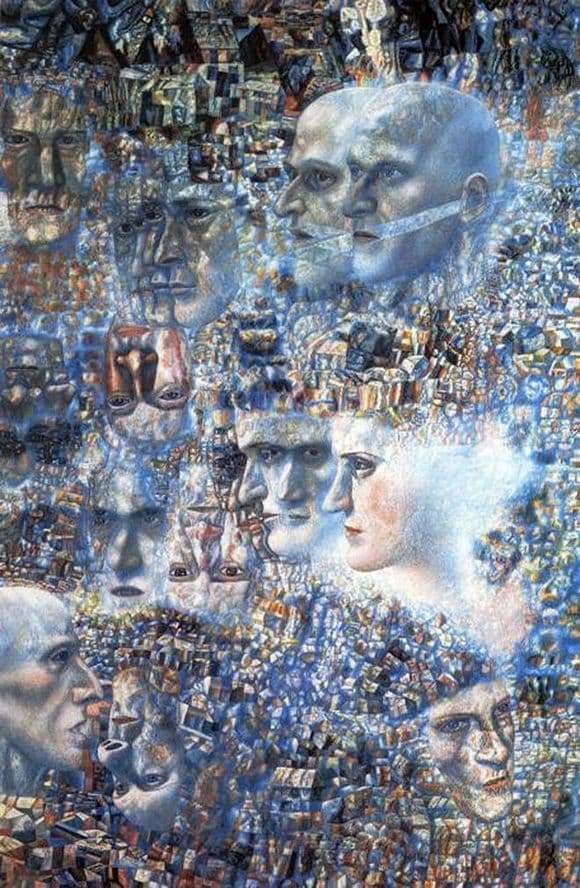 Pavel Filonova – one of the brightest and most complex artists of the twentieth century. He was called “the witness of the unseen,” “conservative futurist.” The artist’s creativity increased interest in avant-garde trends in the USSR.

The paintings of P. Filonov differed in scale, the rejection of the obvious side of reality and the desire to reflect the world of visible and invisible phenomena, the origin of being. His art was analytical, trying to prove that shape and color are not the only tools for transferring visual thought.

With this approach, the design of P. Filonov’s images has always been difficult to explain and understand. “The First Symphony of Shostakovich” is one of the famous interpretations that reflect the creative principles of the master’s painting. The artist explained the essence of the analytical art with the image of the subject from different points of view, creating an intricate pattern. The metaphorical images of the artist reflect the ethereal forms of thought and consciousness. Thus, in the composition of this work, human faces float to the surface from the depth of “units of action”.

The picture was written in 1935 under the impression heard on the radio. P. Filonov was fascinated by the musical form of Shostakovich’s symphony. The union of visual arts and music is an area of ​​exceptional expressiveness of the emerging new image of the era of that time. The artist managed to visualize the melody that touched his feelings and mind.

On the canvas in the vortex flow is born “body” of the state. A colorful background, like a puzzle, fills the entire space with a shapeless mass. Flowing around faces, the variegated viscous “swamp” is likened to the slow course of time, changes and the chaotic chaotic process of the evolution of the epoch.

The faces of people, captured in various angles, reflect the musical transitions of musical composition and public moods of that time. Anxiety and sadness – the faces in the lower part of the composition, the facial expression on the right is tense, which is emphasized by tightly compressed lips and darkly shifted eyebrows. Starting from the darkness and picking up the flute part, a gentle fragile female profile with a light blush appears slightly to the side of the center.

The third part of the symphony is tragic, foreshadowing irreversible disasters. The top of the picture contains the same type of profiles, in the eyes reflected doom and passionlessness. The builders of the “state-organism” are full of contradictions and doubts, trying to seem imperturbable and rushing with enthusiasm to a new life. However, the premonition of a catastrophe does not let them go.

“The First Symphony of Shostakovich” is a complex combination of meanings and symbols. The prevailing idea of ​​chaos is softened by the see-through rays and clear blue hues in the faces, giving out ghostly hopes for a possible bright future.