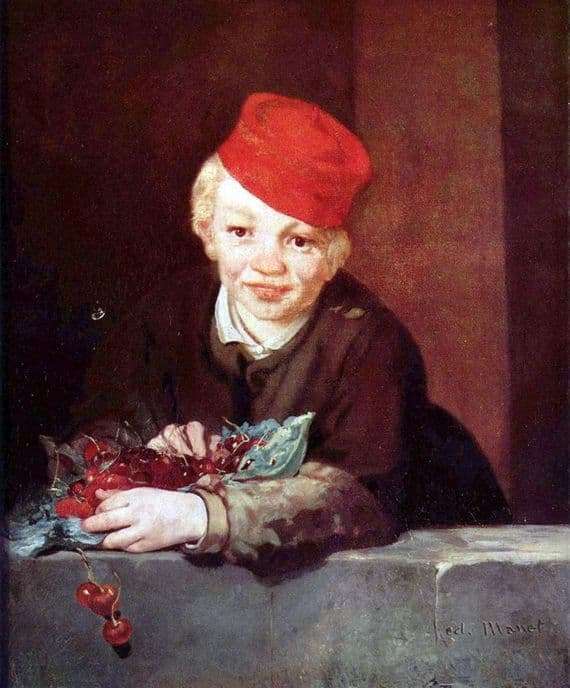 Edouard Manet is a great French artist. He also worked on engraving, was one of the founders of impressionism.

At the beginning of his creative career, Manet began working with Couture, who was very famous at that time. In his workshop, he spent a lot of time, but he was not satisfied with the painting of that time. In the room where the artist worked, was apprentice Alexander. The boy is 15 years old, cleaned the workshop and did small things.

Mane struck up a friendship with the kid. He began to depict it on his canvases. The boy’s liveliness and energy inspired him. Manet wrote from life, also created sketches for further work. The painting “Boy with Cherries” depicts exactly that boy apprentice. His playful look looks at the viewer. The face is highlighted by sunlight. Manet was a great master of portraits. But seemingly calm and beautiful work has a tragic history.

Once, when he came to the workshop, Manet did not find Alexander. He began to look for him and found how he hanged himself in the next room. The body was already cold, and a thin rope strongly crashed into the neck. This was a shock for the artist for life. This story also served as the theme for Baudelaire’s Rope.

Mane could not recover from what he had seen for a long time, he was looking for a new workshop for himself. But everywhere he was pursued by the image of Alexander, who once became the inspiration for his portraits. Mane went around many addresses where it was possible to rent a room. Once he found a suitable place, but when he saw a nail in the wall, he ran out. He always seemed to hang the gallows. How could this merry, playful boy do this to him.

Of course, this story entered the history of world art.

The picture is in France.