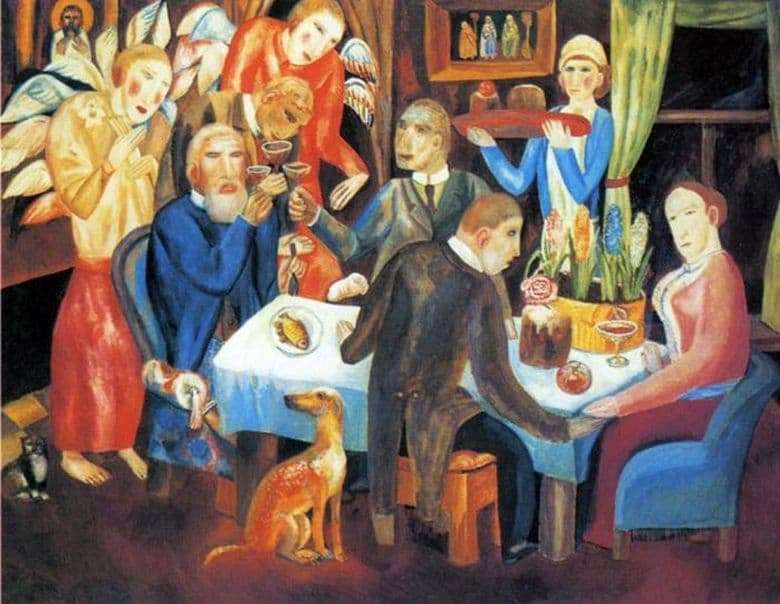 Pavel Filonov is a famous avant-garde artist, one of the most mysterious Russian painters. He called some of his works “formulas” – “flower formula”, “formula of the proletariat”, etc. He created articles where he tried to formulate the principles of analytical art. He called himself “an artist-researcher”, trying to draw parallels between science and art.

“Stubbornly and accurately draw every atom,” Filonov wrote. However, thanks to his atypical position in the late twenties, the artist’s work was recognized to be hostile to the general concept of socialism. The author was accused of formalism, in an effort to escape from reality into the world of fantasy. In 1930, the already-prepared and announced exhibition of the artist was banned; from that time his name was banned in the USSR.

The heroes of genre paintings by Filonov are a rather peculiar type. Often the artist depicts his characters with little or no clothes or in a rags. Figures are exaggerated and deformed, distorted and bent. On the faces of virtually all men and women – melancholy and boundless despondency. The most popular theme for Filonov is the meal, the image of the figures at the table. This type of paintings and applies to “Easter”.

The canvas depicts a poor family at the time of the festive Easter dinner. Along with family members, the angels also take part in the meal – in Filonov they are strange asexual creatures, each of which has several pairs of wings. The table is utterly poor – a lonely dish with fish, an cake, an apple. But carefully written large glasses of alcohol in the hands of each character. Under the table – a dog and a cat waiting for a tasty morsel. Filonov primitivizes figures, flattens them, deprives of details. The Orthodox concept of the Trinity is completely rethought in this picture – at the head of the table are three ordinary men clinking “for health”, but there are only two angels.