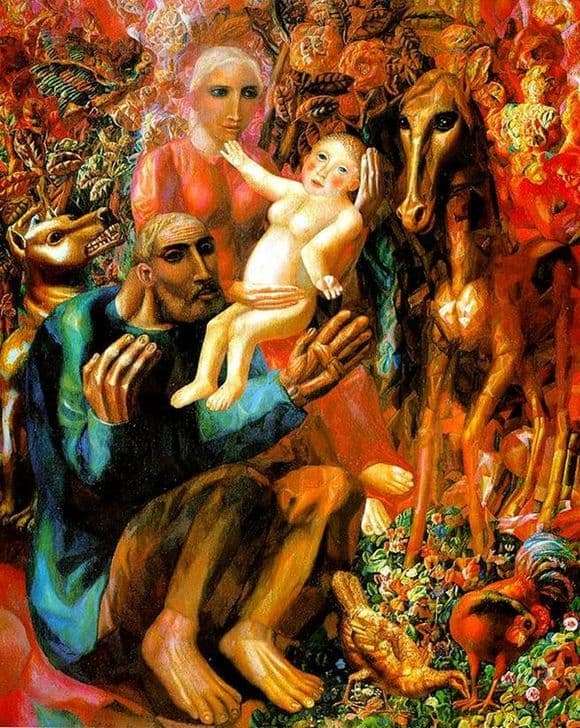 Pavel Filonov – the famous Russian artist – avant-gardist. His works are famous for the special construction of the composition, the uniqueness and technique of the image. Filonov called his method “analytical”. His works are a thorough development, writing and drawing of tiny details that create a special charm to the picture.

Thus, multi-level compositions were created, performed as a whole. Filonov liked to depict objects, phenomena or people not as they can be in reality, but figurative. Although his paintings are considered bright, original, colorful, but they have never been beautiful, pleasant to the eye.

Rather, on the contrary, they aroused and cause disgust, they are heavy for perception, you will not be able to look at them for a long time and enjoy the harmonious picture. It can be said that the author deliberately made his works so unpleasant, used dirty colors, wrote such defiantly-frightening

The “peasant family” is also a rather eccentric phenomenon in Russian painting. Initially, the viewer may seem that he is not observing the work of the famous avant-garde artist, but a stereo image. Work can be divided into foreground and background – they are very separated from each other visually. First you can see a family of three: a man, a woman, and a baby. Next to them are a wolf, a horse, standing on opposite sides of people, and two birds – a chicken and a rooster, living in the lower right corner of the picture.

It is difficult to say about the background: the artist depicted flowers along the entire perimeter, unseparated from each other by space. In addition, they are filled with a variety of figurative figures that surround the peasant family. The bodies of people and animals are not subject to any laws of anatomy and, at first glance, rather evoke a double sensation. The work is dominated by red color.

It is difficult to say about the work of the great avant-gardist. The genre does not imply that it is possible to interpret works uniquely. Filonov conveys tension, a special atmosphere, an associative array. The “peasant family” will not leave indifferent any spectator, having awakened in him the deepest sensations, memories and feelings.