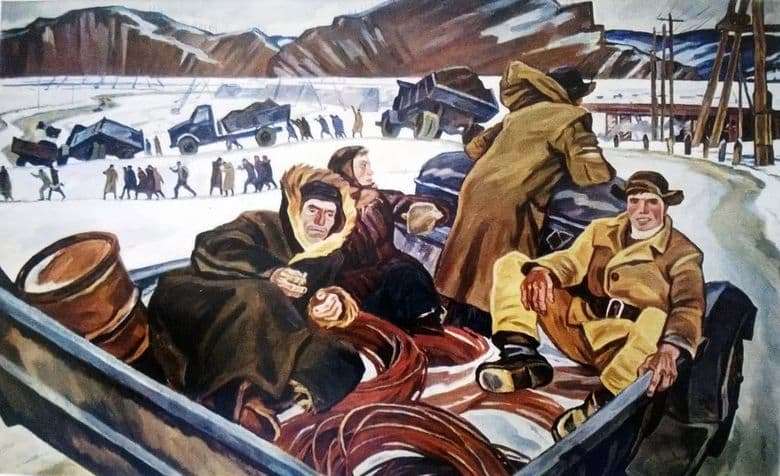 The painting “Our Weekdays” is the first and most significant work of Pavel Nikonov. The work was written in 1960, at a time when the name of Stalin was taken to be associated with all the ills of the country in the past, when the building of communism was in full swing and the Soviet people believed that happiness was in the everyday life that surrounded them. How did Nikonov show this time?

On the canvas, the builders of the GRES are going to do their duty, but these characters are supposedly not heroized. Severe, weathered, frozen, sharp and not beautiful features of faces caused condemnation in the highest circles – can Soviet people be such, the builders of communism are so harsh? The work was banned, the artist was condemned by anyone who was lazy and not lazy, but after 10 years they began to perceive it with very different eyes and the government insistently asked to return the Kazakh Museum to the picture back to Moscow.

Excited wave of indignation and the general appearance of the canvas, it was unusual to see the rough and cut corners of the car body, the men sitting among the barrels and wires, in the background men toli push the car, toli on the move try to jump into it, and the dull colors to this day leads to the viewer, the sadness and feeling that something was not so rosy as our relatives describe it.

Yes, they are engaged in important business, yes, in some sense, the future depends on them. They are an example for their contemporaries, but then it was perceived as something not combined with the concept of communism, because it was acceptable to assume that all working people are happy and satisfied with their position, even in pictures.