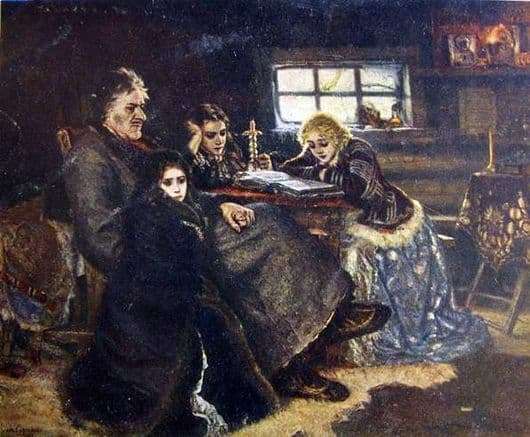 Surikov wrote the canvas “Menshikov in Berezov” in mid-1883. Due to this, he began to be called not only an artist, but also a painter-historian. He was able to accurately display various historical events. So, in the painting “Menshikov in Berezov” depicts one of the most powerful associates of Peter I – Alexander Menshikov. This man actually existed. It is known from history that after Peter the Great died, all the awards received earlier were taken away from Menshikov, after which he and his family were sent to Siberia, or rather to the city of Berezov.

The artist has depicted a small, cramped, uncomfortable room in which he has to spend his days not only for Alexander, but for all his relatives. This room is more like a prison cell than a house for a large family. The ceiling is very low, so it is quite difficult to move here to a tall man (and that’s how Menshikov was). Through a small window in the house almost no light comes. Menshikov’s eldest daughter bent over the book to see at least something. On the shelves – a few icons.

Due to crowding, some movements of people who are in this room are limited. The faces of all are very sad. With this, Surikov as if underlines the hopelessness of human fate. Even the color of the picture increases the tension created. There are no bright colors, which further emphasizes the depressed mood Menshikov.

At the heart of the plot – one evening from the life of the prince. He spends his time with his family. However, each of its members is busy with his own business. The old man, who only recently had everything, now has nothing. On his face – the sadness of surging memories.

In the eyes of children, there is only sadness too. The eldest daughter reads, but the former prince does not listen to her – he was left alone with his thoughts.

The film reveals the drama of the historical personality of Alexander Menshikov, who in a moment lost everything.