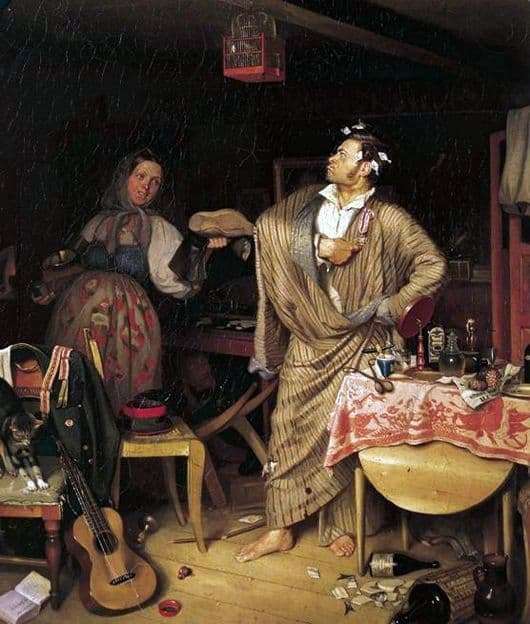 The painting was painted in 1846. This canvas is PA Fedotov “Fresh Chevalier” transmits to the viewer an episode from the life of an official. The official received his first award – the Order – and appears to us as the main character of the painting. His pride and arrogance attracts the eye.

The artist depicted his hero in a caricature image, causing a smile from the viewer. After all, the order received by an official is the lowest reward an official of those times could receive. But the main character, a petty official, sees promotion in this award. He dreams of another life.

The situation in the room of the hero is not rich and explains the hero’s reaction to such a low reward.

The comic image was due to the contrast of his image. In the picture he is depicted in a huge bathrobe, barefoot, in papilotki, standing in a wretched room. The robe is wearing a reward. A serious facial

expression against the background of a bathrobe and home furnishings brings a smile. After all, the gentleman brags in front of his maid. Most likely, he has no one else to show his reward. The look of the maid is indulgent. She has not ceased to carry out their daily business, and stands next to the gentleman, holding a boot in her hands.

The room of the hero is small, many things piled on top of each other. On the dinner table, which, most likely, the worker, is a sausage sliced ​​on a newspaper. Under the table are lying fish bones. In every corner of the room is a mess, things are piled on top of each other. The uniform hangs on two chairs, everywhere there are some things. On one of the chairs the cat tears upholstery.

The hero papillots and hair curlers, which lie here on the table, speak of the hero’s desire to be fashionable and well-groomed.

But all the things of the hero, they do not have proper care. The image of the hero and his desire to be higher in rank than he is, looks ridiculous and ridiculous. Even the cat on the chair is thin and neglected.

The painting “Fresh Cavalier” gives information about the life and traditions of the first half of the 19th century. It has the irony and human emotions.