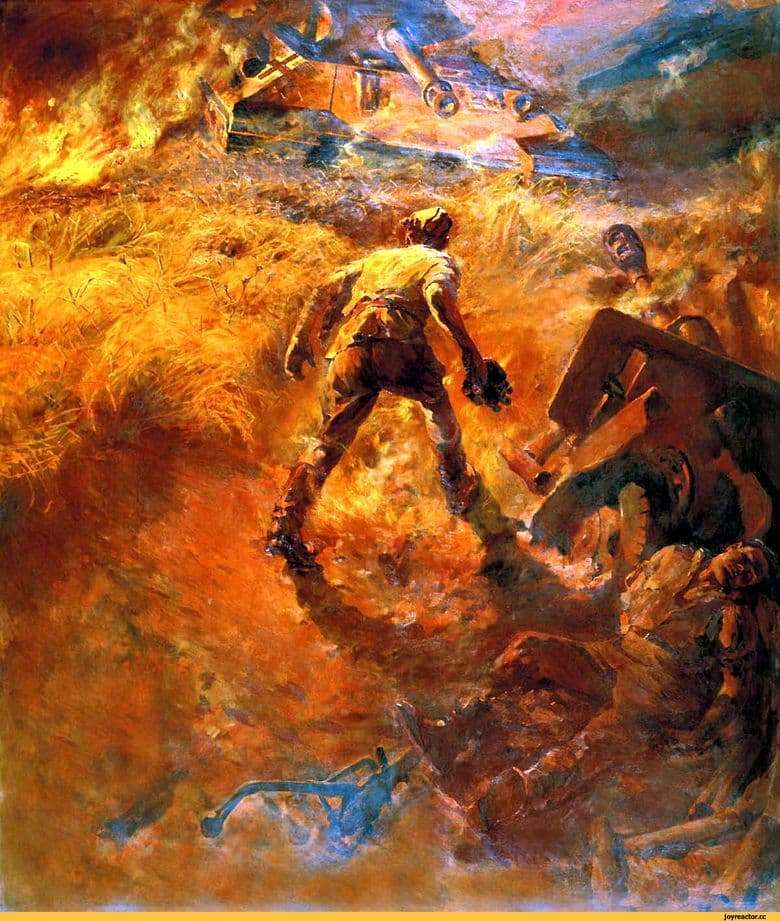 The painting “Duel” evokes the most patriotic feelings of anyone who sees it, and it does not matter whether you are Russian or of a different nationality. It is imbued with the power of spirit and will, because not every person will be able to part with life for the idea, for the country! Peter Krivonogov sought to convey this belief in the correctness of his ideals on his canvases through the heroes of the Great Patriotic War.

“Duel” shows the world one of the episodes of the great war – the Battle of Kursk. There, the German troops, concentrating all their best military equipment, could not resist the courage of the Russian soldiers. The picture tells that the Soviet soldier could go alone, with a grenade in his hands against any equipment, and it does not matter that he himself will die, because he will not be able to hide from the explosion, the main thing is that the enemy was defeated.

There is a certain dynamic – it seems that an explosion is coming and the fire will swallow the whole picture. It was precisely such feats of our soldiers that sometimes turned, it would seem, a completely predetermined outcome of events, in favor of the Soviet army.

It is difficult to call a picture of the plot, Krivonogov took only a single episode – a soldier with a bunch of grenades in his hand against an enemy tank. If you look closely, one more subtext of this work becomes clear – an unequal battle takes place in a field full of already ripe loaves, so it’s time to harvest, but no, blood is being shed.

The picture is made in oil paints, the style is traditional for Soviet art of the time – socialist realism, there is nothing innovative, historically true episode with a propaganda note.