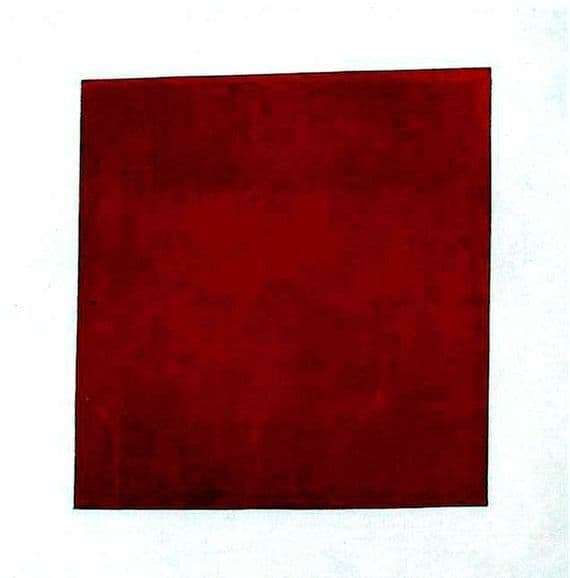 This work of art was created by Kazimir Malevich. The painting was created by the artist in the twentieth century, namely in 1915. On the reverse side, you can familiarize yourself with the second name of the masterpiece – “Woman in two dimensions”. Describing the picture, we can say that it consists of a quadrangle painted in red, which is located on a white background.

Now you can look at the “Red Square” by visiting the Russian Museum. In 1920, the author of a work of art endowed her with a second meaning, which was about an approaching revolution.

As for the meaning of the picture, Ksana Blank dared to compare the suprematism of Kazimir Malevich and the work of Leo Tolstoy. In one story of Tolstoy, there is a description of a room where the main character is covered by anguish. The room looks like this. The walls of the room are whitewashed in white. The space itself was square, which greatly influenced man. There was only one window on which a red curtain was hung. Thus, it is believed that the red square symbolizes depression.

Earlier, Malevich explained the meaning of his first “Black Square”. It consisted in the fact that the square was for the author a kind of feeling, and the white background acted as a void behind this feeling. In this regard, Ksana Blank came to the conclusion that the painting “Red Square” symbolizes the fear of the coming death and the fear of emptiness in a person’s life.

Some scientists believe that the red square is a symbol of blood. Repeatedly expressed the opinion that the picture described bears the fear of the deed and unfulfilled. It remains to note the depth of thought invested in his creation, the author, who turned out to be more than relevant during the creation of the world-famous masterpiece.