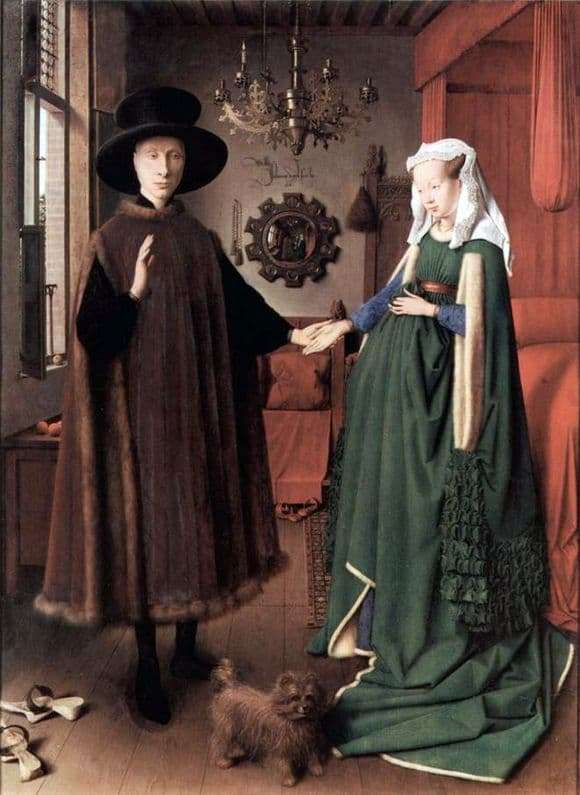 Jan van Eyck depicted the Arnolfini family at the time of the marriage, a household story. A man and a woman are standing opposite each other, slightly turned towards the artist.

The situation in the room is homely, there are slippers, a small dog runs around the house. Painter room displayed an unusual, top view. The hands of the characters are connected, this gesture looks ritual, more like a given, and not as a manifestation of tenderness and love.

The whole composition is built around this gesture. The clothes of the characters are elegant and festive, the man raised his brush to shoulder level, which speaks of his oath. The mirror in the center of the picture displays the light, creating an amazing glow, as a sign of the well-being of family life. A pair is displayed in the mirror, it is impossible to make out facial expressions, but you can see for sure that this is a young couple.

Chet Arnolfini were representatives of a wealthy kind, it can be seen on the situation and their clothes. The girl’s dress is trimmed with fur, the long train is neatly laid out, and she needs help when walking.

It is difficult to imagine a woman in such a dress working or just strolling around the city. The bride may appear to be in position, but in fact in the Middle Ages such a style of dress was in vogue, it was necessary to fold the fabric on the stomach with folds.

The heroine holds her hand on her stomach – a sign of family unity. The color may seem bleak, but for that time it was blue and green that symbolized loyalty and love.

In the face of the heroine, the artist displayed the ideal woman of an entire era. The improbability of the sizes of the depicted objects in the room, the absence of the necessary fireplace in it, all this shows the painter’s imagination. This room could not exist in reality.

The shoes at the feet of the man indicate that the groom does not belong to the nobility. Nobles rode in wheelchairs and did not soil their feet; they needed high-soled shoes.