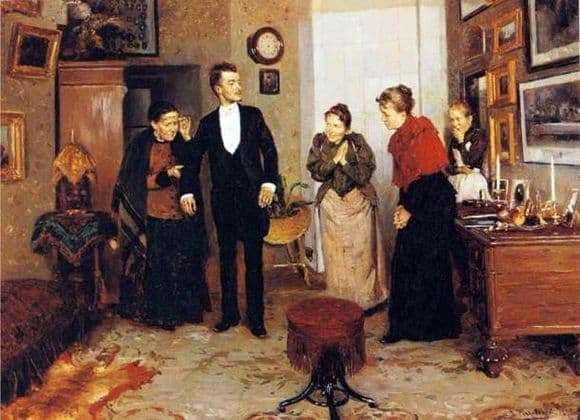 Soviet artist Vladimir Egorovich Makovsky was always dearly loved by the Russian people. With the help of his paintings and today’s viewer can easily be transferred to the atmosphere of past centuries.

One of the best works of the author can be called the picture “The First Coat”, the work on which was completed in 1892. Every detail on it, from the decor of the room to the clothes of the characters, is made with precision and diligence.

On the canvas, the viewer sees a rich, at that time, and comfortable room. It brought together five people from the same family. The main character of the picture is still a young man. He put on a new coat, black with a white shirt, and is clearly unsure of his appearance, so he can not wait to find out the opinions of others. He looks stately and beautiful, but his movements are constrained and he slightly stooped, perhaps due to the fact that he was not used to such clothes.

All women gathered in the room, with interest and admiration consider the guy. The most elderly of them determines the quality of the costume. Judging by her appearance and practicality, then, most likely, this is the grandmother of a young man.

On the other hand is a girl. She smiles broadly, folding her arms around her face. She obviously likes her relative in such a solid and luxurious dress coat. Even the young maid came to see her young master. She is delighted, but she tries to hide her emotions by covering her lips with her hands.

The look of the young man is fixed on one woman – his mother. In his eyes, a question and an expectation of hearing approving words from the most important person are read. But the woman is in no hurry to praise her son. She bowed her head thoughtfully and wove her fingers together.

Bright colors and soft bed tones make the picture lively and natural. Looking at it, the viewer creates the feeling that he himself is in this sunny day, significant for the hero of the canvas.