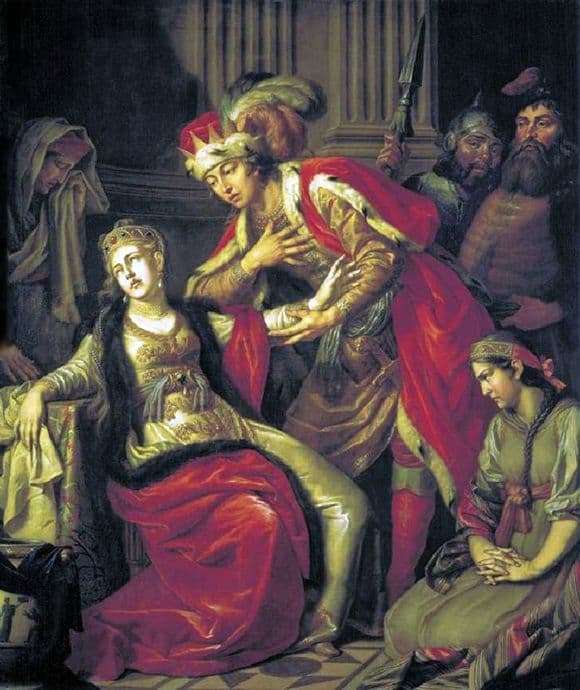 Losenko is a Russian painter who laid the foundation for Russian historical painting. Before him, as such, it did not exist – there were religious and mythological subjects, but mostly Western, which had nothing to do with Russia. Only after Losenko the history of his native country stood out into something that can be reflected in the paintings, thereby perpetuating.

“Vladimir and Rogneda” – the picture is purely plot. It depicts one of the climaxes of the legend about Prince Vladimir and his first wife. Having fallen in love with her for her beauty – Rogneda was the daughter of a prince and the sister of princes, cheerful and cheerful – Vladimir wed to her and was refused. Then, with an army, he invaded the land of her father, burned the city, killed the Rogneda brothers and her parent, and she herself was “married to him by force” – this moment is reflected in the picture.

In the center there are two figures that attract the eye. Rogneda is sitting in a chair, her eyes are blind and white, with one hand she is still trying to push Vladimir away, the other is holding on to a random cloth.

Vladimir above her, in rich robes, in a crown, but his face does not match the image of the rapist and pagan that has developed in the legend – he looks at Rogneda with something like horror and compassion, holds her repulsive hand, presses his second hand to his chest, to heart, as if wanting to get it and show what a melania it is. Perhaps this is excessive romanticization. Perhaps the artist completely changes the meaning of the legend, but at the same time there is a peculiar beauty in this gesture.

On the left, behind the Rogneda chair, the old nurse is crying, her face humble and mournful. For Vladimir, his soldiers are jostling, looking at the stage indifferently and seriously – it seems that they cannot wait to begin to divide the spoil.

Thanks to the change on Vladimir’s face, the whole scene seems ambivalent. Yes, a woman here is going to make a wife by force, but the prince feels a sense of remorse, to which he will come one day.