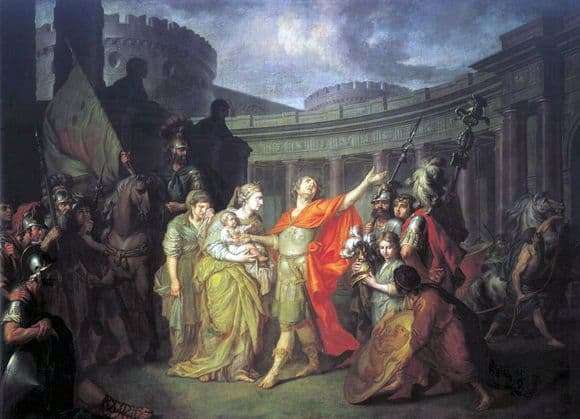 The painting “Hector’s Farewell to Andromache” is written by Russian artist Anton Pavlovich Losenko, who is considered the ideological inspirer and founder of such a direction in the art of the 18th century as historical painting. This work was written in 1773.

The author, although it relies on the classic Homeric plot, but does not follow it exactly. In his work, Losenko did not seek to reproduce the attributes of that distant time, therefore he practically did not care about the historical authenticity of what is depicted in the picture. The main idea of ​​the canvas is patriotism and selfless service to the Motherland, whose spokesmen are the main characters of the painting – Hector and Andromache.

The scene of the picture is the city from which the Trojan hero Hector is sent to battle. The urban landscape that serves as the background frames the scene represented in the painting

as theatrical scenes. The central characters of the painting – Hector and his wife Andromache pushed forward a bit. To the left and to the right are the warriors and the pages, who, like in the theater, are a crowd of individualityless extras standing behind the main characters.

Hector’s pose is filled with tragic heroism – in a spectacular red cloak, he stands, raising his hand, and pompously turning to heaven, says goodbye to his wife and all his fellow citizens. Andromache is also captured by the patriotic fervor of her husband – like the hero’s true wife, she does not shed bitter tears, but inspires him to a feat. At the same time, we do not see any personal experiences of heroes who have completely surrendered to the all-consuming feeling of patriotism.

The picture used strict tone – no pomp and wealth of clothes, lush green, intricately drawn household items. Nothing distracts the viewer from the main idea – the hero’s self-sacrifice in the name of the Motherland.