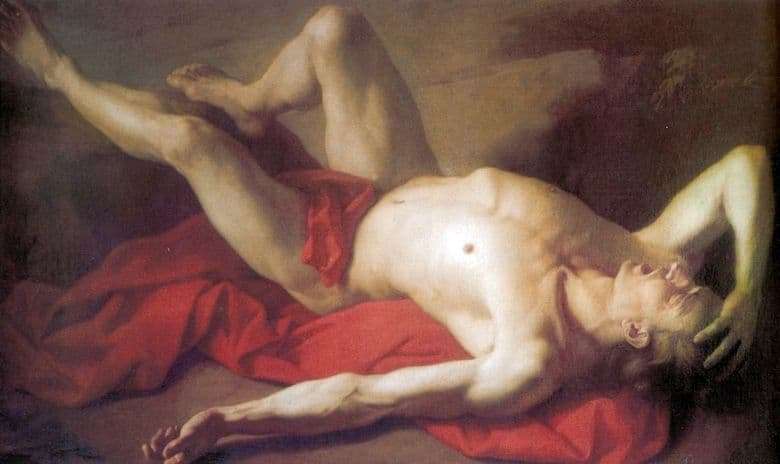 Year of creation – 1768 The picture can be seen in the Kharkov Museum of Fine Arts.

The artist studied classical painting abroad for several years, improving his writing skills. Creating copies of the paintings of the great Raphael, he managed to achieve a high level of drawing. At the time of writing the picture, Losenko thoroughly studied the natural school, so he proceeded to depicting a man in full growth with great knowledge of the matter.

Painting “Abel”, as well as another work of the painter – “Cain”, has no context. The biblical names only identified the models who posed for the canvas, but they ideally correspond to the plot of the paintings. Interestingly, the fixed title appeared later, the author himself did not name his work this way.

The artist set himself the task of showing a strong man at the moment of suffering, which he coped brilliantly with.

The space of the picture is perfectly organized: nude, skillfully draped with red cloth, is located strictly diagonally. Each anatomical detail is carefully written out, proportions are ideally kept.

The figure of Abel who fell on his back is full of pain and despair. The muscles cramped, there is clearly an internal movement in the pale body. Eyes are closed, open mouths give a dying farewell. The hand is the last effort to reach the place of the death blow.

The gloomy general tone of the piece is consonant with the current event. The red spot around the lying Abel attracts attention: the viewer gradually ceases to see a section of fabric in the picture, perceiving it as a spreading blood stain.

The absence of a second plan, the landscape environment, which was so commonly depicted around a human figure, emphasizes

The artistic mastery of the painter was not only noted, but also noted: a talented artist was awarded the title of academician for “Abel and Cain”.