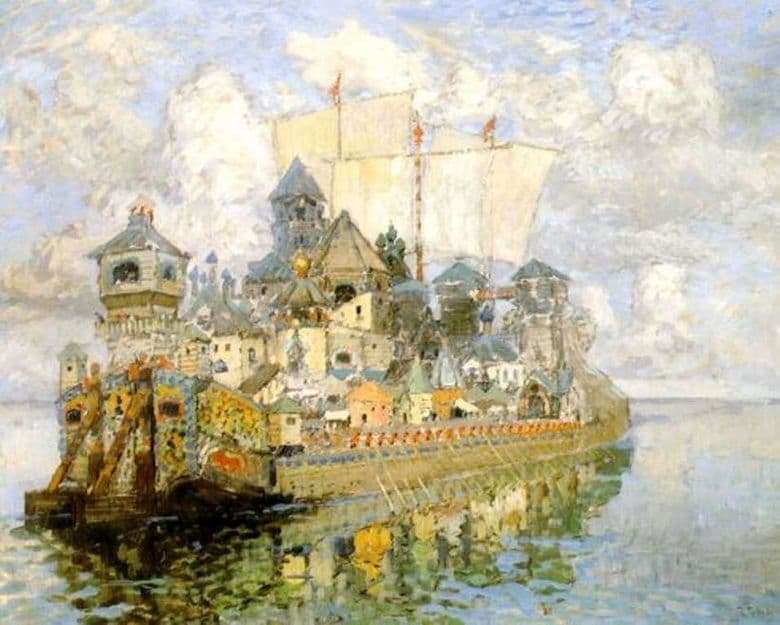 For the basis of the idea, Konstantin Gorbatov took the myth of the ancient city called Kitezh. According to the stories, hail – small Kitezh was built on the banks of the Volga River. The founder was Prince Vladimir. Soon, a lake Svetloyar was discovered near the city and a hail of Great Kitezh was built. The lake is unique not only for its legend about the mysterious city. Until now, scientists argue about its origin – it has all the signs of volcanic, old, glacial lakes. The name of the city, scientists and historians say, is associated with the princely village of Kideksha, which was located near Suzdal and was burned down by the Tatars in 1237.

The artist decided to portray the city, which looks like a big, ghost ship sailing around the lake. It depicts a large variety of buildings. The presence of oars and sails suggests that the city-ship can at any moment break off and go traveling around the world. According to the legend, when there was Tatar-Mongol conquest, Khan Batu came very close to the city of Kitezh and saw that the hail was not protected and not fortified. It meant an easy victory. Suddenly, fountains of water burst out of the ground, and hid the city under the water. If you believe the legend, the city continues to live under water, its citizens remained alive and healthy. Since then, this place is considered sacred.

The painting “Kitezh” was painted in 1913. Material work – gouache and whitewash, oil. Size – 49.5 x 59 cm. Today, the work of the artist Gorbatov can be seen at exhibitions and in antique shops.