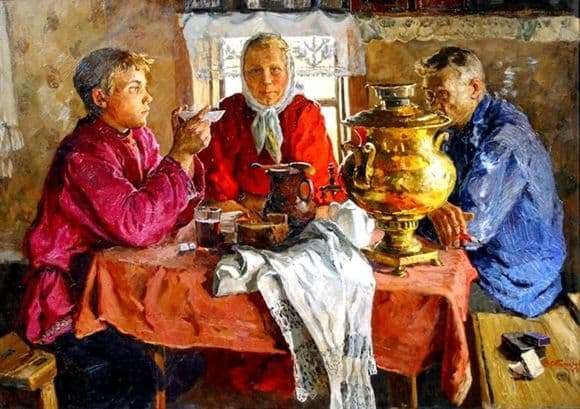 Since childhood, Vladimir Stozharov showed love for the national culture. He often traveled to the cities and suburbs of Russia, where he observed the life and folk craft of the peasants. After university, he began to travel even more often across the expanses of his country. This period was the most intense in the work of the Soviet artist. The artist continuously worked and created paintings that rank among the best works of Soviet art.

Among them is the composition in the interior of “At the samovar”, which attracts attention with bright and rich colors. In the center of the composition is a village family who sits at the table and eats. The views of the characters are directed in different directions. A woman looks with a barely noticeable smile at the viewer, a man, thinking or looking, looks down. And the boy with his eyes wide open looks into the distance, as if he is looking at something outside the window.

On the table are a samovar, a glass, a jug – traditional items of national life. Depicting the family in his picture, Vladimir Stozharov seems to be trying to communicate to the public his attitude towards village things. There is nothing dearer and closer to the artist than the peasant life.

Despite his love for depicting peasant utensils and the traditions of folk crafts, the artist avoids the motifs of sadness in his paintings. This also applies to the 1956 samovar canvas. There are no nostalgic notes about the past. Rather, it depicts the features of traditional village life, which are still found in the life of modern villages.