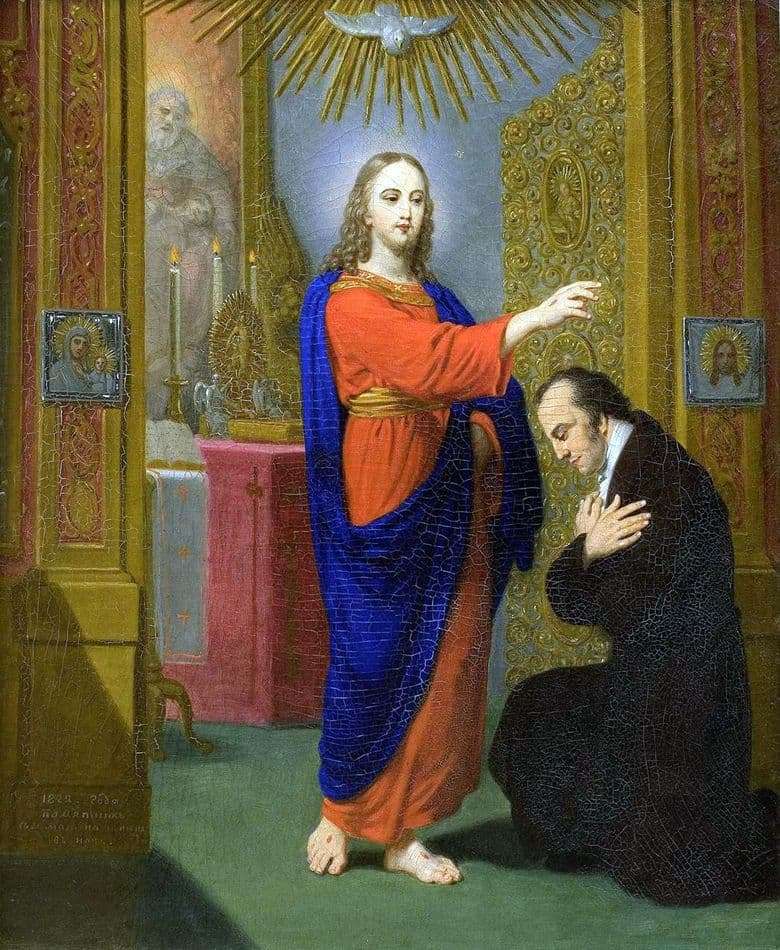 Vladimir Lukich Borovikovsky was born into a noble, but poor family. At the time of Vladimir’s birth, the Borovikovskys owned only a house in Mirgorod and a couple of land plots. The father and brothers of the future artist were engaged in icon painting, and Vladimir was going to choose this same type of painting for his work. The first creations of the young artist are the icons.

The early portraits of Borovikovsky were quite unprofessional. In 1787, Catherine the Second came to the Crimea, where the author lived at that time. She draws attention to the work of Vladimir Lukich and insists on his move to St. Petersburg. It was supposed that the talented painter would go to the Academy of Fine Arts, but for a thirty-year-old creator such a step was somewhat belated. In St. Petersburg, Borovikovsky completely switched to portrait painting, but religious motifs are constantly slipping in his work.

The only known self-portrait of the artist is the painting “Christ blessing a kneeling man” – and this is again the plot on the theme of the New Testament. Borovikovsky depicted himself as a character blessed by Jesus, dressed in a dark silk robe. The gracious expression of the face of a kneeling man as well as possible conveys the feelings of the man to whom grace has descended. Folding his arms across his chest, the hero looks pacified and full of humility. Jesus in this picture is a tall man with curly blond hair of Eastern European, Slavic type. On it – the typical clothes of the Roman, executed in bright scarlet and azure tones.

The tunic is richly decorated with gold. However, Christ is barefoot, and on his feet are traces of nails left over from the crucifixion. The plot of the picture and the performance are characteristic of the late creative work of Vladimir Lukich. In the last years of his life, the artist became interested in religious mysticism and returned to what he began with, devoting himself entirely to Orthodox painting.