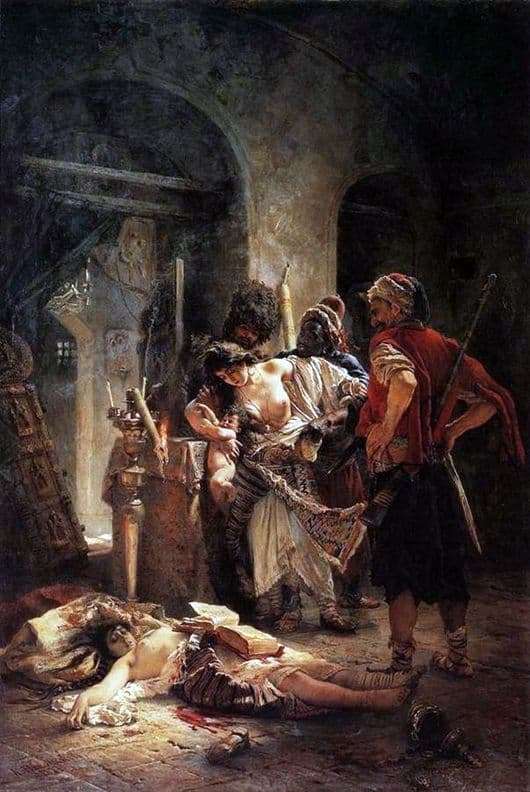 Cloth depicting the drama – rather the exception in the work of Vladimir Makovsky, than the trend. His paintings are usually bright and kind, but the news of how the Turks brutally massacred the Bulgarian population, suppressing the rebellion, could not leave the subtle artistic nature indifferent.

The characters in the film “The Bolganskiy Martyrs” are two young women, one of whom may be already dead, a baby who, apparently, will not have to know mortal life, and three Turkish executioners. They surrounded the unfortunate woman and tear off her clothes, and she tries to hold the sobbing baby in her hands, but her eyes are no longer fixed on the child, but on the tortured girlfriend lying on the floor backwards. Near it – puddles of blood. These are signs of torture.

Judging by the surrounding objects and environment, the action takes place in an Orthodox church, which further emphasizes the sacrilege of what is happening. The temple is barbarously ravaged, now it’s the turn of the young mother and her child. One would like to say that these Turkish warriors have nothing sacred.

Even if they have another faith, they could stop in front of the little man who just started living, in front of his mother, without which the crumb could not live a day, but the rigidity of these three Turks leaves no hope that they will be taken prisoner.

Having perpetuated such a dramatic plot, Vladimir Makovsky decided to sell his work, and send the money he received to Bulgaria to help the victims in order to at least help this people to heal their emotional wounds.

Thanks to this picture, we now more clearly imagine what inhumanity is and how any war, even the smallest, even a simple suppression of rebellion, can ruin the souls, but this should not be on Earth.