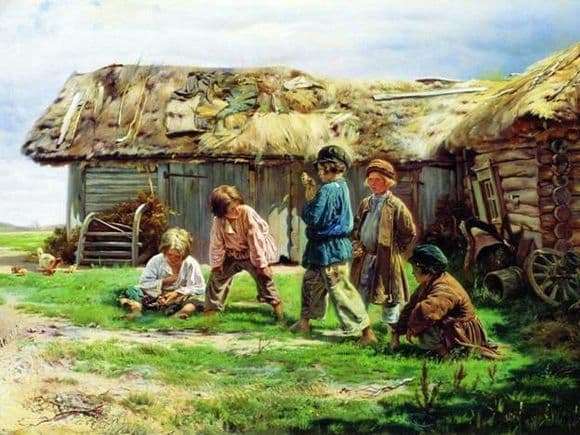 The painter Vladimir Makovsky was always interested in life and empathized with the trials of simple Russian people. Often he took inspiration in the life of poor people: peasants, maids and other members of the lower classes. While other artists considered such characters unworthy of their attention.

Realism was the main stylistic direction of the works of Makovsky. Cloth “Playing in the grandmother” is one of the most interesting and vivid works of the painter. It was written in 1870.

It depicts the entertainment of simple village children. This fun is called Grandma. Its task is to bring down the cow bones arranged in a special way. At that time, only the children of the boyars could afford toys, and the children of the workers were forced to construct amusements from various materials at hand.

Five boys came together to pass the time while their parents were busy with the hard work of poor peasants. Their faces are focused and passionate. The boy, standing in the middle, squints to take an accurate blow to the established “grandmothers”. The rest are closely watching his movements.

The company of children is located in the backyard of the village hut. The house and the barn, standing next to it, is built from slightly leaning boards. Straw is spread on their roofs. In some places she was worn out. In order to keep the rooms warm when the harsh Russian winter comes, the residents patched holes with boards and old clothes.

Through the lush green grass growing on the lawn where the boys’ company is sitting, it is clear that the weather is even warm outside. But children are dressed in tight shirts and caps – it means that summer has not yet come into its own, and, most likely, this is a spring day.

Looking at this wonderful picture, the viewer is so keen on its plot that it is trying to guess whether the boy will win. Makovsky loved life, boiling in the expanses of Russia. His paintings are proof of this.