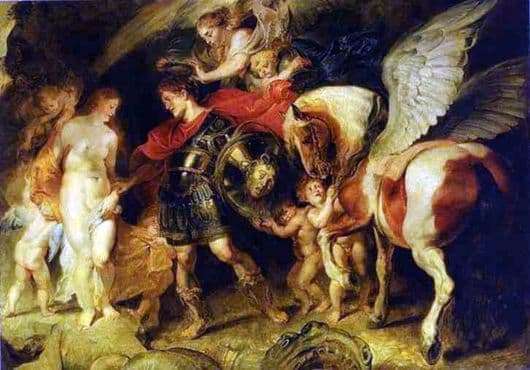 One of the most striking masterpieces, which is still relevant today, is, of course, the work of Perseus and Andromeda, one of the greatest artists of Peter Paul Rubens, a painter from Holland. Indeed, you should not even look at this picture for a long time, as you immediately feel the deep dynamics of this story, which originates from the ancient myths of Greece.

Stories about the Greek gods, great deeds of heroes and others, all his life captivated the attention of Rubens, the result of which we can observe such beautiful masterpieces. True, it should be said that Rubens interpreted each story and myth in its own way. As, for example, in this picture we see how the heroic human qualities conquer dark forces. Naturally in the center of the picture is the life-affirming protagonist, Perseus.

Above him hovers the Goddess of Glory, as it should, to be with all valiant heroes. A rather quivering moment is the gentle touch of Perseus on Andromeda, the picture at this moment seems to come alive, and you become an unwitting witness to all this. Quite interesting is the fact that Rubens captured Andromeda, oddly enough, not the ideal beauty of ancient times, but as a girl with rather curvaceous forms and red hair.

Practically everything in this picture just shouts and sings, strength, health, power and beauty. Take, for example, a powerful Pegasus horse, who seemed not to catch his breath after the fight and greedily swallows and exhales the air. In this work, one can not help but be amazed at the flawless, perfect and masterful game with blue, red, orange. Skill in writing a naked body, above all praise. The human body has so realistic color,