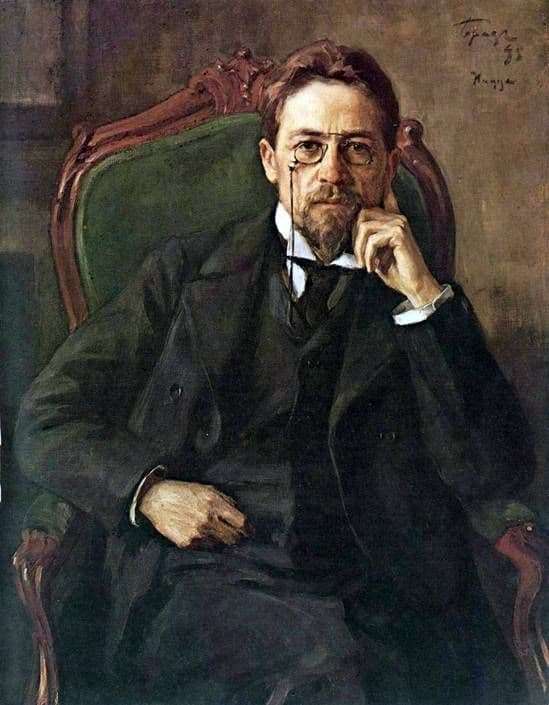 Osip Braz was recognized as one of the best portrait painters of his time. His work was inherent in the colorfulness and relaxed manner of writing, as well as the combination of various artistic styles and trends. The cherished creative idea of the master was the resurrection of the visual heritage of the Russian parade portrait. Having received a European education, upon returning to Russia, Braz was equally subject to harsh, accusing criticism – he was condemned for stereotypical and virtuoso, but “soulless” performance; and positive reviews – in 1896 he was awarded a diploma of the St. Petersburg Academy of Arts. Strangely enough, the master was awarded the title of the artist not for a special competitive work, but for a series of portraits. Some of them were later acquired by P. Tretyakov, who later ordered a portrait of Chekhov to Braz.

Incidentally, this portrait is the only complete image in his lifetime

of the writer. Osip Emmanuilovich wrote a portrait for two years, presenting the final version in the autumn of 1898 in Nice. The public perceived the canvas is ambiguous. It is worth noting that the writer himself did not like this picture. Anton Pavlovich expressed his feelings in the following way: “… if I became a pessimist and write gloomy stories, then my portrait is to blame for this…”

It is difficult to imagine Anton Pavlovich in such a light, because the portrait was painted at the peak of his glory, and this man was always full of energy and fortitude. But neither the last nor one of the first “trial” works of Braz, in the opinion of the opponents, could not recreate the lively, courageous and amazing image of Anton Chekhov. Only a few, including Braz’s well-wisher, art critic Alexander Benois, argued that the young painter was able to objectively and authentically capture the image of a famous writer.

Braz portrayed Anton Pavlovich at the age of about forty years. His whole image is graceful and breathes intelligence. He sits in a luxurious old chair, his eyes hidden behind pince-nez. The pose is tense and nervous, there is a certain stiffness. The writer’s face is pale, with an expression of painful sadness, presumably even then Chekhov was aware of his illness. The picture is dominated by cold gloomy tones, emphasizing the severity of the portrait and the elusive sadness hidden in the facial features. In the image does not look through and a drop of that boyish mischief, which was inherent in the writer and was captured in photographs. Stiffness, deep thoughtfulness and apathy.

This portrait was the last image of Anton Chekhov. No one more of the artists tried to embody the image of the writer.