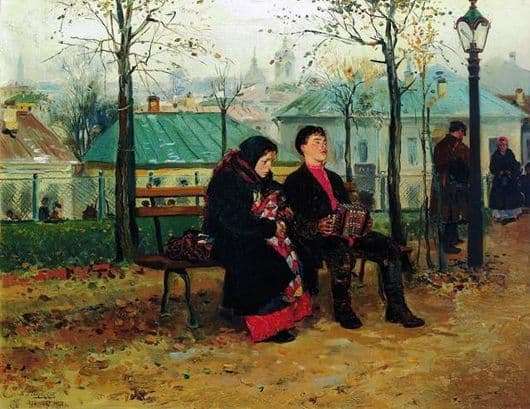 Vladimir Makovsky touched upon one of the most acute problems in Russia of that time in the film “On the Boulevard”, written in 1877, which now may seem distant and irrelevant, but to contemporaries it should have seemed quite typical. The main problem of the painting is the departure of the peasants in the city to earn money.

The breadwinner was forced to leave the family: parents, wife, children, life without them was broken, family ties weakened and even disappeared, and the usual foundations of the village world collapsed, as did the patriarchal world. The main characters of the work “On the Boulevard” are the wife who came to her young husband to Moscow and the husband himself, who, like many others, went to the city to earn money and changed beyond recognition. Such changes in the behavior of the faithful surprised and saddened the girl, who came with the hope of sharing everything that had accumulated with her husband. But, when he came to the boulevard and sat down on the bench, he seemed not to notice his beloved.

City life has taken possession of him: here he is, fatovaty and tipsy, lounging impressively, playing the harmonica, while not thinking about anything or anyone except himself and his appearance. He is rouge and happy with himself, which cannot be said about his wife: saddened by irreparable changes, she hunched over and looked hopelessly into the distance. Perhaps she is ashamed of her beloved, perhaps she regrets the loss of her own soul, and, of course, it is very difficult for her to realize that she is useless to this person.

The whole picture unfolds against the background of the autumn cityscape: trees with fallen leaves, gray sky and roofs of houses with small snow patches; which adds to her even more drama. Small in size and plot, the canvas contains a lot of thoughts, experiences, artist’s observations. Yes, the picture is somewhat irrelevant today, but this does not prevent her from being filled with the idea and sympathy for the girls of those times who found themselves in a similar position, as well as their families.