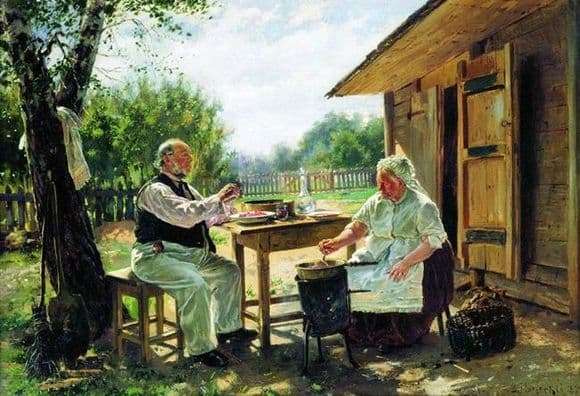 Vladimir Makovsky – hereditary artist. His father had a hand in the discovery of the Moscow School of Painting, Sculpture and Architecture. The brother also gave his life to art.

Many famous writers, poets, painters were entered into the house. It is not surprising that both boys chose a creative path. Painting became for the Makovsky family not only a source of income, but also a matter of a lifetime.

After graduating from college, which once opened his father, he successfully plunged into the world of creativity. Mainly in his paintings Makovsky depicted scenes from life. For some of his works received prestigious awards and medals. For some time he painted icons for temples and churches, showed great interest in depicting children on his canvases, developing sketches for painting walls of buildings in Petrograd.

The state Tretyakov Gallery contains the work of Vladimir Makovsky, created in 1876, under the name “Cooking Jam”. This canvas refers to realism, made with oil on canvas. “Cook jam” is a genre thematic work, filled with life and warmth. It depicts two elderly people near the village house. Summer time, beautiful weather.

Man and woman make jam. Strikingly accurate artist conveyed even the smallest details of the plot. It seems that the wind is about to carry the aroma of berries and fruits.