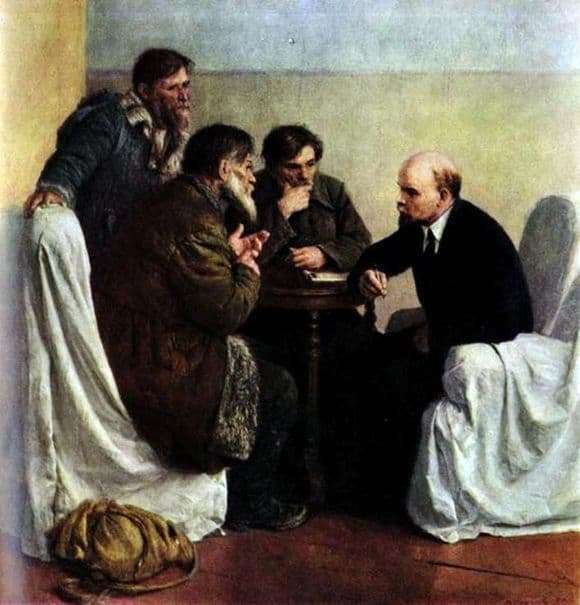 Soviet artist Vladimir Serov wrote a series of paintings dedicated to the leader of the Union republics – V. I. Lenin. “Walkers near Lenin” is one of such canvases created in 1950. As a government minister of art, he chose the genre of socialist realism.

This picture is well known and easy to understand. On a small canvas four figures fit Serov: Lenin and the peasants. They are crowded in an office in the Smolny at a small table, three of them are sitting, one man leaned his hand on the back of the chair during a long conversation. By such a method of depicting figures, the artist wanted to expressly indicate the closeness of the leader and common people, their unity. The peasant peasants are working people, they did not have time to take off their fur coats.

Lenin in a strict black suit, holds a pen and a notepad on the table. A gray-bearded old man says about the needs of the peasants, about rural life, with gentle hand gestures accompany speech. The other two men are silent, and they all look to Lenin. In their eyes, the credibility of a high-ranking official is read, they are confident that the needs of the village will be heard and the wise leader knows exactly how to solve any of their problems.

With such attention the peasants listen to Lenin, that the spectators have the same desire to trust him, with a light heart to present their fate and the fate of the city, country and world.

Serov’s realism is visible in the detailed unadorned description of the peasants’ faces, hands, and clothes: the skin is rough, wrinkled, white beards and strands of hair on their heads turn white.

The picture successfully shows the sincerity of the conversation, even some spiritual warmth and love. The head of the Soviet Union is seen by us as a caring patron for ordinary people far from public affairs.

Serov received the honorary State Prize for the painting “Walkers at Lenin”.