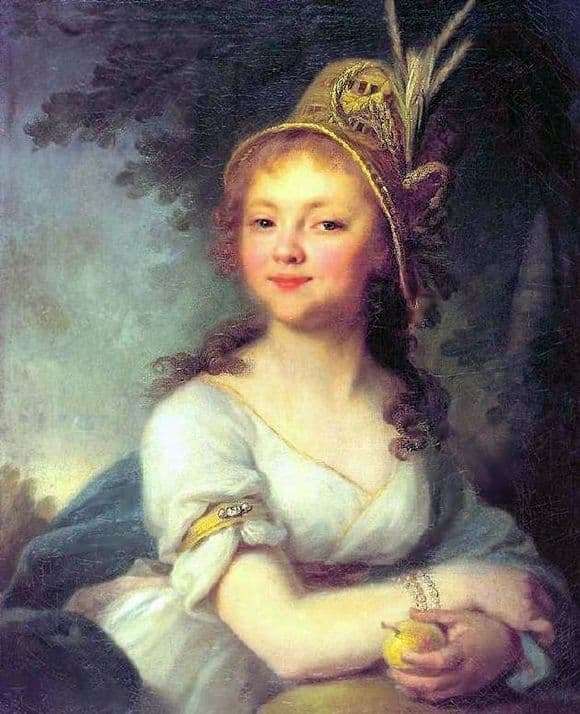 Vladimir Lukich Borovikovsky outstanding portraitist of the 18th century. His most famous paintings are portraits of young and beautiful girls. “Portrait of Arsenyev” is just such.

The painting depicts a girl of about sixteen. She has blond curly hair long below the shoulders. Ruddy puffy cheeks, but rather white skin. According to the girl alongside, one can guess that she is from a noble family.

The dress is white, with gold ornaments on the sleeves and neck. And on the head of the little girl there is a hat of an unusual shade of golden hue. Feathers or ears of wheat stick out of the hat. The girl looks at us with a proud look. Her nose is slightly raised up. And her lips fold into a slight smile.

Judging by the background, the girl is sitting outdoors. Behind her is a clear blue sky and a green sapling. On the right hand and girls are two thin pearl bracelets. And in her left hand she holds a yellow apple. Many Symbolists believe that this apple symbolizes our world, and the point is that our world is in the hands of a girl. But others claim that the apple and the bizarre hat are a symbol of simplicity, which Borovikovsky wanted to convey.

But who really is a beautiful girl? Ekaterina Arsenyeva was a student of the Smolny Institute of noble maidens. And Borovikovsky devoted many pictures to the pupils of this institute. Arsenyev, indeed, came from a noble family. Her father was a military man, he even participated in the storming of Ishmael during the Russian-Turkish war.

But not the origin of this girl is important. And what is important is that with his portraits of lovely girls, Borovikovsky seemed to say that there is nothing more beautiful in the world than the beauty of a young girl.

Admire the picture “Portrait of Arsenyeva” can be in the State Russian Museum, which is located in St. Petersburg.