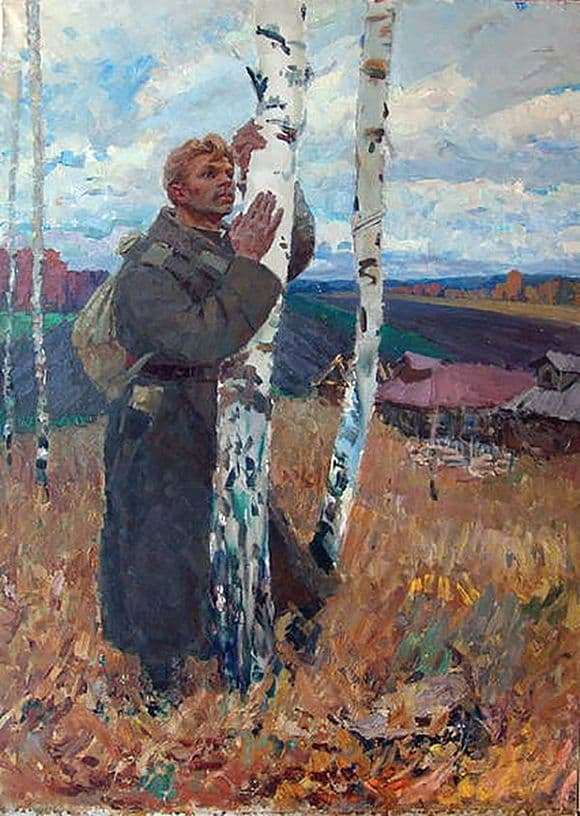 The canvas depicts a soldier who was leaning against a birch tree. He hugs her so tenderly like his girlfriend. It can be seen that the soldier has not been in his homeland for a long time and birch personifies his native Russian land. He was probably in a foreign country for a long time and was very depressed. Around the hero are birches, and below is a small village.

This landscape is typical of Russia. The soldier is dressed in a military overcoat, and behind his shoulders a bag, his regrown hair weaves the wind. The boy’s gaze is aloof, as if he is deep in his thoughts, and perhaps in memories. Maybe a few years ago he went to the front from here, on his face all the burdens of front-line life were imprinted. He is not the same boy who, with a naive look, went to fight with the enemy. He matured and changed a lot. Only leaning against a tree, he can mentally return to that carefree time without war. The artist is very realistic conveyed the nature of the region.

Yellowed grass and plowed field says that autumn has come. The painter is very symbolic depicted birch, to which the soldier leaned, next to the stump. The stump is quite fresh, apparently the tree was cut down recently. As if there is a possibility of the death of Russian courage, but, nevertheless, the other birch trees stand firmly and they have support. The soldier’s gaze froze the question of how he lived, how his close people now live. He anticipates a long-awaited meeting, but has not yet decided to leave such a familiar and native grove. There are only a few steps left between the past and the future, but making them a soldier is not at all easy. He needs to gain strength, the war has exhausted him, he is morally exhausted.

Perhaps someone did not wait for him, but someone waits hopefully. He will come and say that he is alive and will leave spiritual wounds to himself. Having embraced a birch, the soldier regains his lost emotional balance and harmony. This is so important before meeting with the most expensive. The picture shows the first long-awaited meeting of a soldier, a meeting with his homeland.