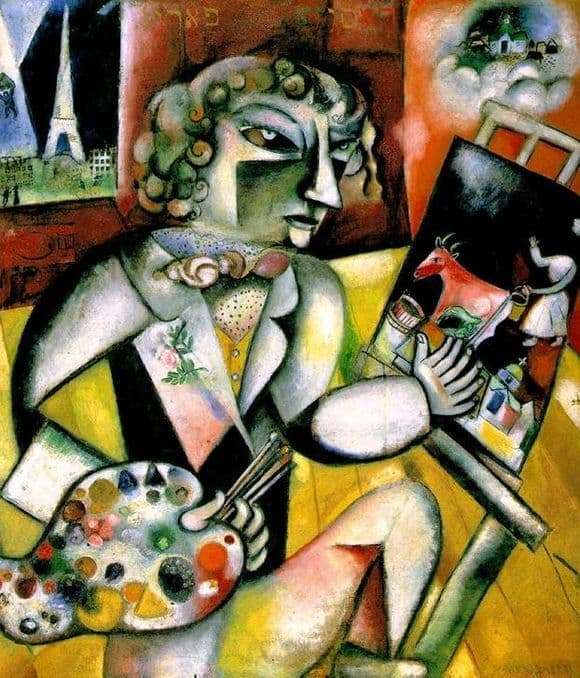 A canvas by an artist with Jewish roots, Marc Chagall was released in 1912. The picture was created according to the canons of neo-primitivism in combination with cubism. It expresses the author’s restlessness, his eternal search for the Motherland, the delicate interweaving of three cultures in one person. Marc Chagall lived for a long time in two countries – France and Russia, but he had nowhere to find peace and happiness. This is indicated by the names of states that are clearly readable on the wall and are made in the Hebrew language of the artist. In addition, in his thoughts, the silhouette of a Russian Orthodox church.

The image is built on contrasts. Against the background of a combination of Russian-Jewish culture, a real French dandy was written. The artist in the picture is successful and dressed in the latest fashion of the time. His hairstyle is flawless, the costume is made with chic, a beautiful flower is seen in the buttonhole of his jacket. In his Paris apartment, overlooking the main attraction of France, he wrote his next masterpiece. The sophisticated eye recognizes the painting “Russia, donkeys and others” in the work on the easel. A ladder is thrown behind the canvas, symbolizing the comprehension of the sacred meaning by the author.

“Self-portrait with seven fingers” contains hints of prosperity and successful life: a bright palette of colors, screaming bow tie, a radiant view from the window. Their proximity to the symbolism of Russia creates a strange twofold impression. The images are combined into a single concise mosaic, despite soy diversity and some strangeness. Often, a masterpiece is associated with canonical Russian icons. Here and the similarity of the motionless body of the artist, and the characteristic religious designations, and elegant flat style.