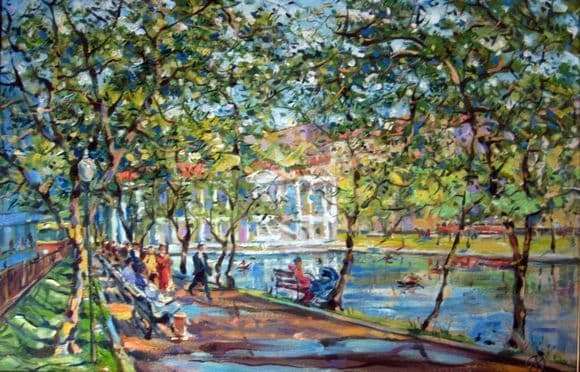 “Clean Ponds” – a picture made in a slightly blurry, very attractive style – something like this can be observed by myopic people who have to go without glasses. Everything in the picture is slightly blurred.

The outlines of trees, the outlines of benches float, it is difficult to discern something other than human figures – nothing definite can be said about them, it remains only to speculate. Two trams are crawling around, a big important duck is swimming in a pond, a woman above the carriage is looking at the water. Another woman reads, a man walks, as well as two women not far from him. Ponds live their usual lives, they saw a lot more.

Trams have been driving around for quite some time. People come to them – to feed the fat cute ducks, sit on the benches (the attractiveness of the idea to sit over the bench and relax under the foliage of the foliage the artist conveyed just fine;

it’s especially sad to look at the picture if it’s dreary autumn outside), to walk with the children, in silence and alone talk to each other. Perhaps the ponds saw explanations of love, and just lovers, strolling in the shade of the lime trees, and slowly kissing under the lanterns.

There were sure to be companies of cheeky young people drinking beer and singing discordant songs, and certainly they couldn’t do without a battered gig, hooting after two girls. Ponds have heard the conversations of the topic, and even in the picture it seems that among the crowd a raid of time heard and seen under the lindens appears. Perhaps it is precisely that which so troubles the eyes, makes the image blurry and attractive in this blur. Look, catch the general mood (elevated and thoughtful at the same time), imagine your own and think about your own.

You can even come under lindens, compare them with the picture and estimate what is more attractive – a fairy tale passed through the artist’s eyes, or a real life.