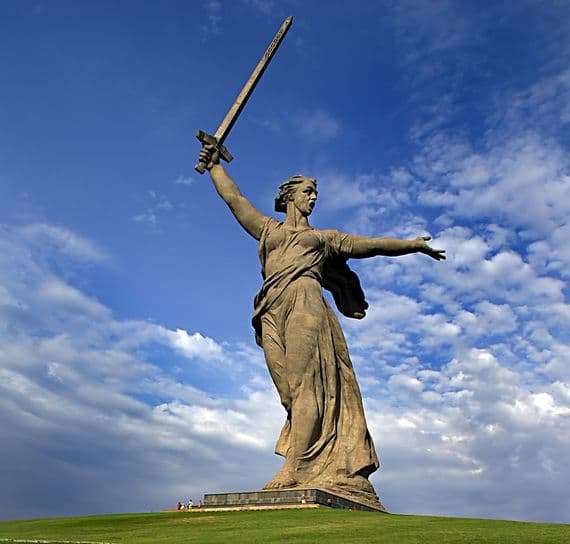 Roads lead to the monument on this mound. One of the roads departs from the Square of Sorrow. Gravestones are located along the paths leading to the monument. The names of those who died in the battle for Stalingrad are written on them. In the mound, under the monument, 34 and a half thousand people are buried. They all became heroes who won the freedom for their country.

The author of the monument is the sculptor E. Vuchetich. The prototype of the woman depicted on the sculpture was one of the waitresses of the Volgograd restaurant.

Interestingly, the original design of this sculpture should have been presented in a different way. It was assumed that the monument will have male and female figures. And the soldier must bow before the woman on her knees. In her hand a woman should have a flag in her hands. However, the author of the sculpture did not consider these details as necessary, and we see the sculpture exactly as it is today.

This monument – the image of the mother-heroine, who convenes heroes to fight the enemies of the motherland. Everything in her is courageous, peculiar to a woman doing a heroic act: sharp lines of a figure, mouth and eyes open, an outstretched hand. Such details create a feeling of strength and courage, as well as an atmosphere of anxiety looming over the country. Sculpture is also a reminder of the hardest times that were destined to be experienced by the inhabitants of a huge country.

From the very foot of the monument, the spectator has a beautiful view of the city-hero Volgograd, as well as the Volga River.