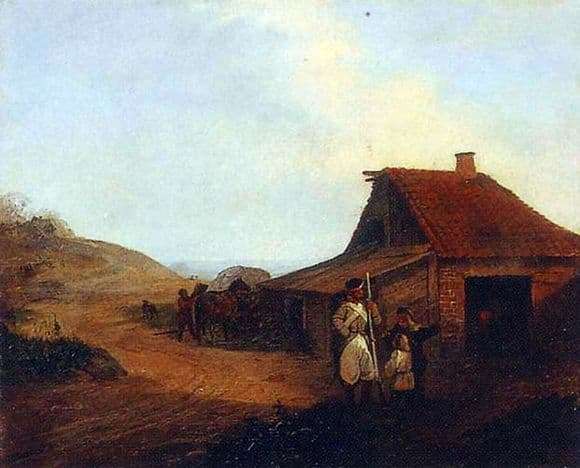 F. I. Baykov was a prominent representative of the battle painting. He also painted landscapes, but the military theme was close to him and the main part of his work is made up of exactly the pictures of this trend.

The work “At the Forge” realistically reflects the life of ordinary peasants of that time and the difficult situation in which they found themselves during military operations. As you can see, the forge is located in an open area, perhaps at a junction of roads. The usual rustic little house with a wooden extension. Through the doorway one can hardly notice the burning flame of the furnace. Most likely, the blacksmith continues his work. In the background, a rural man, who is harnessed a horse, a dog runs beside him.

The main character of the picture is a soldier. He stands proudly with his hand on his hip. His figure exudes self-confidence, even arrogance. Perhaps this is his horse, he rode to the forge.

The blacksmith at that time could not refuse the soldier, and it was dangerous to go against him. The people running up to the soldier are interested in something. Or maybe this soldier approached them and asked for directions. After all, a passer-by hand points somewhere to the side. He allegedly sends a visitor, suggesting how to go on. Visitors can see a great rarity for these lands.

F. I. Baykov very accurately conveyed the anxiety of the time and even the danger. The picture is made in dark colors, although the day is clear. The canvas simply exudes the tension that hung at the forge. A soldier could stop shoeing a horse or clean a weapon, while the profession of a blacksmith was in great demand. Judging by the confident position of the soldier and the bewildered faces of the people, it can be assumed that military actions were being conducted.

The locals are helpless and scared. During war, civilians always suffer. In the distance you can see more approaching silhouettes. Perhaps this retreat of the army and the blacksmith will have to work a lot, because all the soldiers will stop here at the forge.