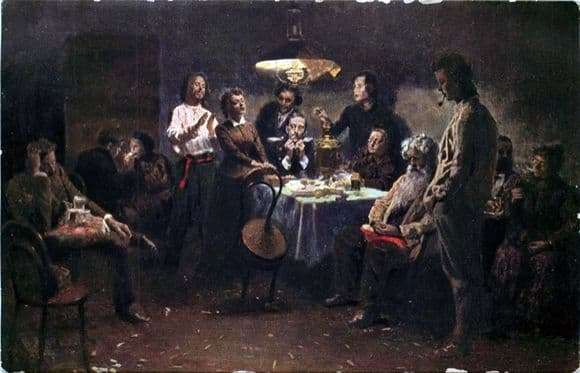 This picture is in one of the halls of the Tretyakov Gallery. It depicts young people in a dimly lit, small room. The light source is a kerosene lamp, rising from under the lampshade. Students gathered around the table waiting for the samovar to boil. Nobody starts the meal, although the table is set and everything is ready for tea drinking. The heroes of the canvas directed all their attention to the young girl, who enthusiastically gave a speech. In fact, everything that happens is very difficult to call a party in the usual sense of the word. The meeting of young people is more like an underground meeting.

The girl in the center sets out her ideas. From her face it is noticeable that she firmly believes in her own convictions and is very serious about what she is saying. On the faces of the crowd completely different emotions. Some listen enthusiastically to the speaker, others grin, not taking it seriously. Some, on the contrary, reflect on the speech and try to penetrate it. Despite the fact that each perceives a girl in different ways, they are united by a common goal, for the sake of which they are ready to overcome the trials and dare to face any difficulties that await them outside the walls of this cozy room.

In the artist’s paintings one can feel his deep sympathy for his own people, with whom he is ready to share both joys and sorrows. His work tells about the life of the most ordinary people. Each of his paintings is a kind of story telling about a particular event. He was well versed in the fate of his own people, knowing both the dark and the bright side of the Russian soul. He raised deep social themes that reflect the problems of the society of his time. According to his unique canvases, one can judge the history of Russian society, which was not indifferent to the author.