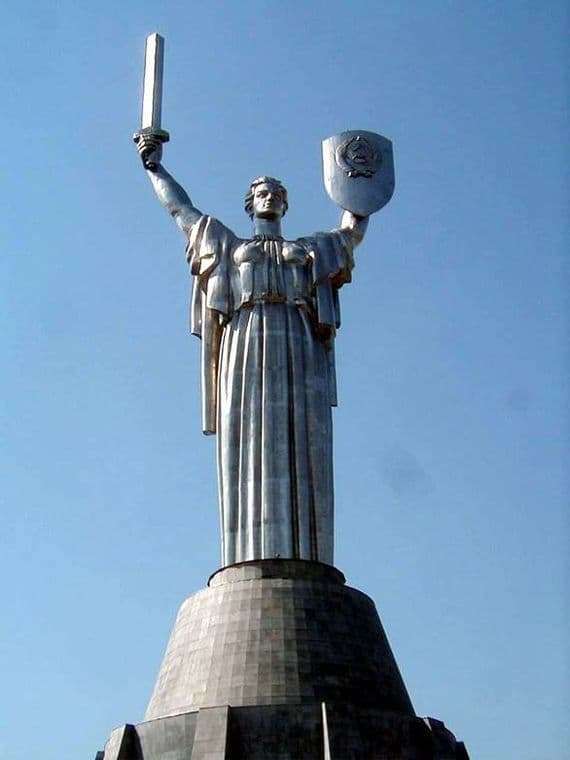 The monument-sculpture Motherland in the city of Kiev is truly majestic and large-scale. The sculpture can be seen from the most remote areas of the capital, for the statue, together with the pedestal, rises 102 meters. The opening of the monument took place in 1981, and it is part of the complex of the national museum. Motherland is the most beautiful image with political, philosophical and aesthetic components. The image of Mother Russia is mostly inherent in the Russian people and can be traced vividly, starting with the ancient Russian myths, the classics smoothly flowing into the poetry, and logically enshrined in the sculptures of modernity.

The statue is a stately figure of a woman with her hands up. In her right hand she holds a sword, in her left she holds a shield. These attributes were chosen for the sculpture, because for a long time for the people are a symbol of holiness. The shield was emphasized, the loss of it

in battle was considered a disgrace. The shield in the hand of the Motherland – the personification of strength, courage, readiness at any moment to defend their people. The shield is decorated with the emblem of the Soviet state, and, despite the fact that today it is not entirely relevant, the symbols of unity, community and mutual assistance in real life that adorn it continue to play a leading role. Hex sword – a symbol of fair punishment, willingness to tame anyone who encroaches on someone else’s. The sword consists of a wide blade and hilt, decorated, as in the old days, by significant signs in the 20th century – five-pointed stars. Majestically and monumental looks the figure of a woman. Calmly she peers into the distance, as if gazing at the possession. Her clothes do not betray her belonging to any class,

The proud image of a woman is both calm and unapproachable. The shield and the sword is not only utilitarian in nature, but has a semantic focus. This is a spiritual defense that protects a person from evil, on the protection of faith, love and repentance at all times.