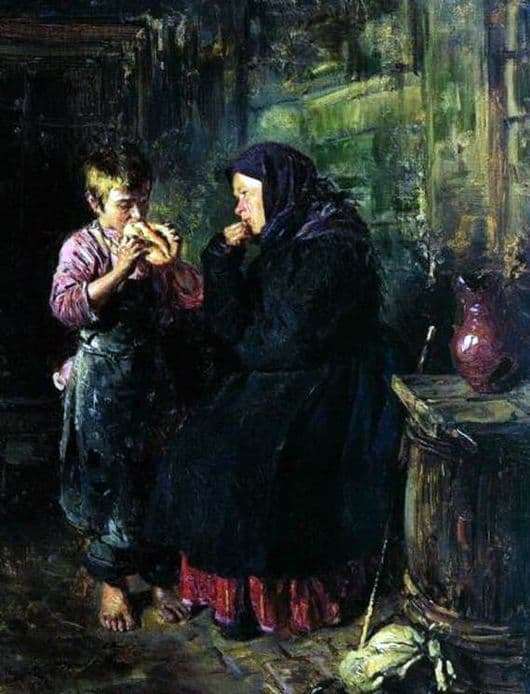 The painting “Date” was written by V. Makovsky. In 1883. This is a typical product of the “Wanderers” with the theme of impoverishment and the hard life of the people.

The painting depicts the meeting of a mother, a peasant woman, with her son, who had been apprenticed to the city. A mother looks at her son with sadness, her posture and sad appearance betrays a heavy feeling experienced during their rare encounters. She does not embrace her son and does not talk to him, probably due to fatigue. You can understand that she gave her son to learn the craft because of deep needs.

She is dressed in a country style: she is wearing a black coat, from which a red skirt is visible, and a black scarf is tied over her head. Judging by the mother’s attire, she came from the village, came on foot, and the time of their meeting is winter.

The boy eagerly eats the rolls brought by his mother, he literally clutched at him eagerly chewing. His face is pale and very, not for years serious. He is very poorly dressed to work in the shop. He is not wearing shoes, although it is winter outside, on top of a faded red shirt, coarse trousers, over which a dirty apron is worn with a dirty cloth for wiping his hands.

Their meeting took place in a dirty room with wooden walls and earth-darkened from time to time. Perhaps in her work rest. There is a jug on the barrel so that you can drink it, and sunlight streams dimly from the window on the left. The picture uses mostly dark colors that convey the tragedy of the situation, since the subsequent meeting of the mother and son may not take place. To all, the poor woman is too tired from a long journey to often see her son. The picture conveys a typical version of the case from the life of ordinary people, which makes the viewer sympathize and empathize with their suffering and grief.