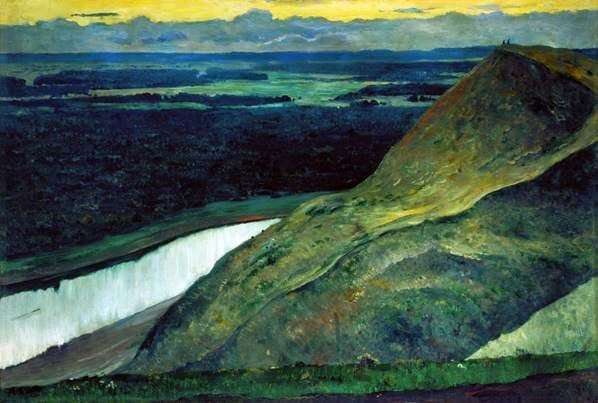 Mikhail Nesterov is considered one of the best masters of landscape painting. Nature attracted him in its most diverse manifestations. Especially dear, Russian nature. Many paintings were written by him in his native Ufa and glorified northern beauty. The landscapes of Nesterov are filled with philosophical reflections on the meaning of life and the personal experiences of the artist.

From 1905 until 1914, Mikhail Nesterov painted several paintings under the general theme “The Homeland of Aksakovs”. Interestingly, during this period, he depicted many people against the backdrop of a delightful landscape, because he associated man and nature as something single, integral. So the picture “Aksakov’s Homeland” written by him in 1914 rather stands out from this trend. The artist writes several versions of the canvas – on the original, sketchy depicted houses on the slope, and later – signs of human presence disappear.

In the first sketch, known as “The Devil’s Settlement” written at the very beginning of the vague century, it is clear that the artist sings with a clear brushstroke a sullen mountain that has seen everything in the world and is flowing at its foot of the fast, easy river, and beyond the river is the world of endless fields. In the painting, written later, in 1906 a figure of a walking pensive woman in an old dress appears. The mountain and the river are transformed into theatrical scenes, and the figure becomes the central one, the mental state of which enhances the effect of the landscape. In one of the last versions, written in 1913, a woman is replaced by an image of a monk-monk, adding a picture of religious and symbolic meaning.