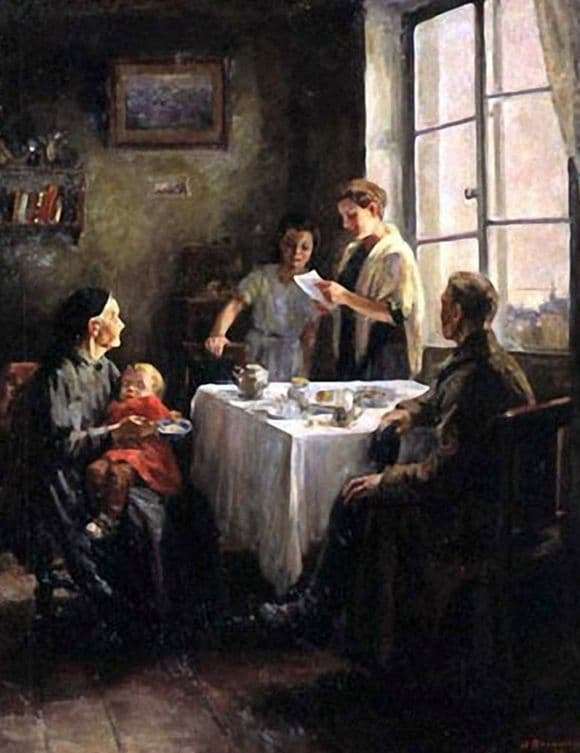 The picture was created in the most intense moment of the Patriotic War. Then life was divided into two worlds: the bloodshed and the cruelty of battles on the front line and the long expectations of mothers, wives, children in the deep rear. Each news met with trepidation and hope. Just the time of receiving the news and displayed on her canvas Nina Vatolina.

She connected two worlds on the canvas: here the soldier who brought the news from the front line, and the seed of his colleague, who eagerly received the news.

The soldier sits with his back to the viewer, but it is still clear that he will not be here long. He holds the cap in his hands, but he never took off his overcoat. The soldier just sat down to rest after a long journey.

Next to him at the table sits a gray-haired woman, a mother, holding a little girl in her lap. The granddaughter sleeps, not knowing the alarming moment that occurs in the house. And the wife and the eldest daughter are reading the letter written by a dear man with bated breath.

The wife, running through the lines, looks at each of them with anxiety and hope, because they were written by the hand of her beloved husband, because it is a guarantee that he is still alive. The same trepidation is felt in the eldest girl: she catches every word of the mother from her father’s letter, time about the time looking at the letters drawn by his hand.

It seems that time has stopped, and the world has stopped: for those in the room there is nothing more important than a letter, they live this moment trying to extend it. The family has forgotten about their worries, they have not even finished their lunch. But nobody remembers about this: the most important thing now is a letter from her husband and father, written by him in the moments of lull between battles.

Even the guest did not remain indifferent, he also attentively listens to the news in the front, although he himself could tell no less. But the joy of the moment allowed him to forget about his experiences for a minute.

The sunlight that penetrates through the window only enhances the sensations of joy and hope that has settled in the house with the arrival of news from the front. A close person stayed alive and healthy. Soviet troops are now advancing, and the end of the war is getting closer every day.